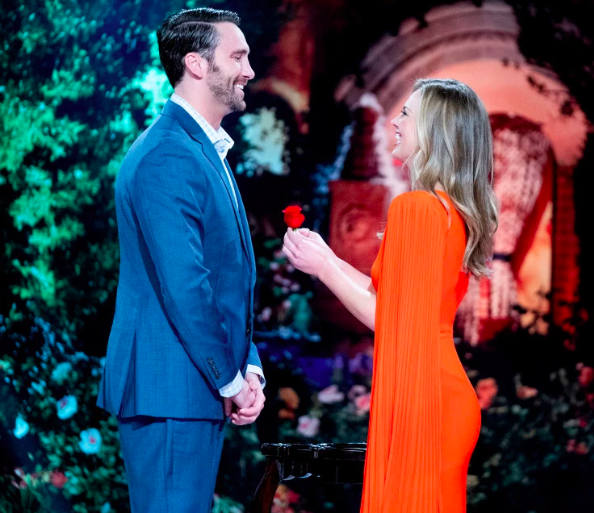 Hannah Brown was recently named ABC’s new bachelorette.  Given the way that Colton Underwood’s season ended the finale needed a little something extra. Enter the official announcement of Hannah B as the Bachelorette. Colton was a shockingly responsible bachelor and therefore, generally dull.

Another reason why you're going to want to watch #TheBachelorFinale tonight!🤗

Hannah met five suitors last night.  They were all conventionally handsome.  Some stood out more than others.  Cam Ayala eventually received the first impression rose from Hannah.  He made quite the entrance doing a silly rap for a visibly nervous Hannah.  His energy seems to match Hannah’s sweet and goofy side.  It’s worth noting that Hannah also rapped when she first met Colton.  At first glance, this match seems compelling.  Here’s to hoping Cam isn’t a Tennesee or Louisianna State fan. That would ruin things for a Crimson Tide superfan like Hannah.

So Who is Cam Anyway?

While ABC is yet to publish their official bios of the contestants, the Internet is needy.  News outlets have already figured out who our rapping goofball Cam is.  His full name is Cameron Ayala.  His Instagram remains private but, that may change in coming weeks as viewers get excited for the new season of The Bachelorette.   Cam does, however, have a public Twitter account ignored since 2015.  It is a helpful window into his real personality, as 2015 is a solid four years before his appearance on network television and a need to suppress the less flattering aspects of his character.

What we Know so Far

His Twitter reflects that he is just as sweet and lovable as he came across last night on the finale. Cameron tweets about the likes of Buzzfeed quiz results, Mad Men, and Ryan Gosling.  So far there are no red flags, he comes across as wholesome and sweet as a hummingbird cake.  He is a proud Aggie, a graduate of Texas A&M.  Currently, he resides in Austin and seems to enjoy his hometown.  It is another southern college town with dominant football culture, not unlike Hannah’s hometown.  These two seem to have a lot in common.

I got 10 out of 10 on How Austin Are You Really?!! http://t.co/YSxfGvifOv via @buzzfeeders

Cam’s social media presence also reflects that he suffers from a medical condition called lymphedema.  A hallmark of this disease is swelling to the arms and legs.  Lymphedema is often caused by damage to the lymphatic system as a result of cancer treatment.  There is no cure for this affliction, but PT and pressurized socks can lessen symptoms.  Hopefully, this doesn’t cause Cameron issues when he inevitably flies overseas as part of the show.  It is clear that Cameron has been through a lot and matured along the way.  Given his sunny disposition in spite of his adversity, he would make an excellent match for any woman.  Hopefully, Hannah sees that he’s a keeper. It is suspected Cam will most certainly be a front runner next season.

Season 15 of  The Bachelorette premieres May 13 on ABC.