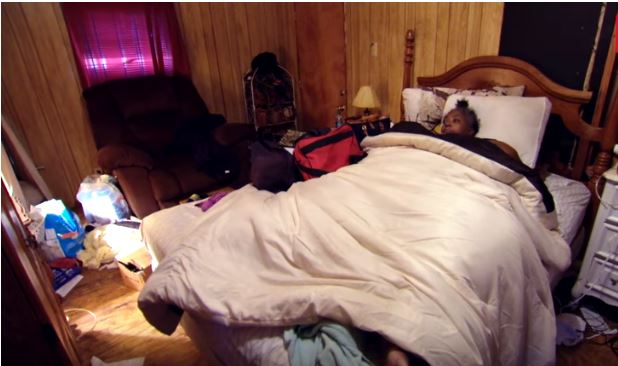 Do you remember Lisa Fleming from 600 Lb Life? We came to know her from her bed in Mobile, Alabama living her life. Lisa’s story to how she became her weight is similar to the others frequently heard on the show. She suffered from weight problems since she was a child and they became worse after the murder of her brother. She witnessed it, and her mom blamed her for, and the passing of her father. Lisa notes, that when she was 11-years-old, she weighed 120 pounds. She also tells us how maggots were recently found in the folds of her skin.

Upon arrival at the hospital in Houston to meet Dr. Nowzaradan, Lisa found out that she weighed 704 pounds… much more than she expected. After being admitted to the hospital for a few months and being on a strict diet, Lisa lost 87 pounds putting her at 617 pounds. She was then discharged to her apartment to continue to lose weight on her own; specifically, 30 pounds per Dr. Nowzaradan. Unfortunately, this success was short-lived due to the fact that when she was discharged from the hospital, her daughter Danielle could not be there to control her mother’s food intake and instead Lisa’s boyfriend Herburt, moved to Houston to take care of her. Herburt became subject to Lisa’s manipulation and fed her all the foods she should not have been eating, reversing her weight loss and subsequently gaining 29 pounds.

Despite being given multiple chances by Dr. Nowzaradan to lose weight and even a psychiatric evaluation due to her claims of feeling suicidal, Dr. Nowzaradan had had enough with her “antics” and was discharged from the program. Her episode ends with her and her daughter going over why Lisa could not receive weight loss surgery and what her next steps would be.

Fast forward six months after the airing of her episode, we have learned that Lisa passed away at the age of 50. We learned of her passing through the Facebook post her daughter Danielle made. In her post, she outlines that after leaving the program, her mother was able to lose 200 pounds and even stand on her own, a great accomplishment! According to Danielle, Lisa passed away from pre-existing conditions and sicknesses that she suffered prior to the show taping. “Her body just gave out.”

We wish Lisa’s family all the best as they heal from this tragedy. Don’t miss the new episodes of My 600 Lb. Life on TLC.