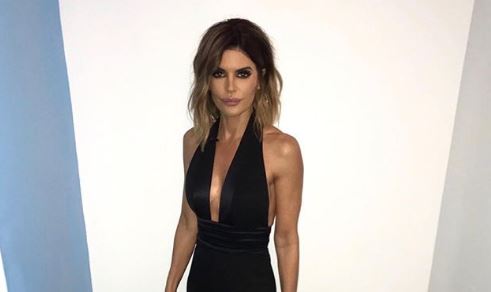 Lisa Rinna might finally get her dream of building a family dynasty a la Kardashian! Rumors are circulating that her two daughters with hubby Harry Hamlin are filming a spin-off reality show. Delilah Bella, 20, and Amelia Gray, 17, are models who are also starting their own fashion line.

Sources say, Lisa and Harry, a television icon in his own right, would be willing to make sporadic guest appearances on the show. However, the main focus will be the personal lives of their daughters. Both girls have walked in high-profile fashion shows at New York Fashion Week.

Lisa Rinna’s daughter Amelia has been open on her mom’s show Real Housewives of Beverly Hills about her struggle with anorexia. Lisa herself has been dogged with rumors for years that she had an eating disorder because she’s so thin. She has always maintained that she keeps a slim figure with diet and exercise.

It remains to be seen if either or both girls follow Lisa and Harry’s footprints into acting. Lisa got her start on the soap opera Days of Our Lives and later on Primetime soap Melrose Place. Harry has done a wide variety of movies and television over the years. His most beloved role was on the 1980s cult show L.A. Law.

While Lisa Rinna may be a familiar face on QVC these days, she also owned a clothing store in L.A. Before Lisa started selling items from her own clothing line called Bella Gray, she had another Bella Gray.

Opened in 2003, Bella Gray was a specialty boutique in Sherman Oaks, California. It shuttered in 2012. Shortly after the store closed, Lisa announced that she’d be releasing her own fashion line, also called Bella Gray. (It turns out QVC had visited her store in 2011 and liked what they saw.)

The name of the store and fashion line are, of course, the middle names of her two daughter – Delilah (Bella) and Amelia (Gray. Lisa’s clothes are only available through QVC and she is one of their top-grossing clients.

Is There Anything This Family Can’t Do?

In addition to modeling, creating a fashion line and cracking up Bravo viewers with their hilarious commentary, elder daughter Delilah is also an aspiring singer. The Hamlin family has the one-up on the tuneless Kardashian sisters!

Watch Real Housewives of Beverly Hills Tuesdays on Bravo for more appearances by the Hamlin girls.