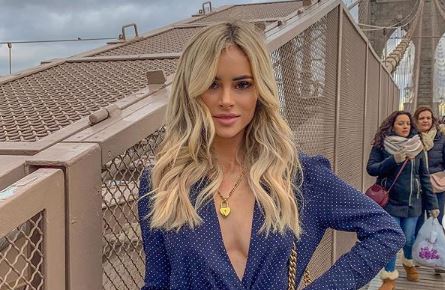 I might not want to admit that I have read my fair share of books written by contestants from Bachelor Nation, including My Reality by Melissa Rycroft, Trista Sutter’s Happily Ever After and Courtney Robertson’s I Didn’t Come Here to Make Friends. In addition, I read a behind the scenes tell-all appropriately named Bachelor Nation.

Amanda Stanton is the latest to cash in on becoming a published author. Her book, Now Accepting Roses: Finding Myself While Searching for the One . . . and Other Lessons I Learned from “The Bachelor”, is already on presale, but fans will have to wait until September 3, 2019, to actually read it. (Until then, you can follow her on Instagram where she enjoys posting pics of her and her daughters modeling gigs, as well as travel.)

MOOD 😊 because my book is now available for pre-sale on Amazon and Barnes & Noble. Link in my bio to purchase. This is so surreal! I’m beyond excited for y’all to read it (& a little anxious) TAG a friend who also wants to read it & I’ll send a copy to 3 of you + your bestie 🌹👯

Amanda Stanton claims that writing has been therapeutic. I can’t help but wonder who the ghost writer is. She has a beautiful face and body that looks like she spends more time working out than lounging at the beach. It’s ironic that a divorced mom of two with three stints on The Bachelor franchise and two failed engagements is in the position to dispense love advice to others. Perhaps she’s taking a “do as I say, not as I did stance.”

Here is how Stanton’s book is explained. This gives you a bit of what to expect.

“Part-memoir, part girl’s guide, Now Accepting Roses is full of never-before-told stories from behind the scenes of one of America’s most popular television shows—but this book isn’t just for fans of The Bachelor. This book is for anyone navigating the crazy and exciting world of finding real love. Amanda also reveals the valuable lessons for life and relationships that she learned after the world watched her look for love on television—three times. Everything she now knows about dating, she learned from being on The Bachelor. Amanda’s unique experiences have left her with some hard-earned wisdom to share, including her own ‘rules’ for dating and how to truly find yourself, as she has. Thanks to juggling dating, parenting and life, she better understands the way dating works and shares how you can find love while prioritizing your own needs.

Amanda’s friendly, heartfelt guidance will feel like a good friend offering her most personal advice on life, love, and self-care—and her wild stories will rival the juiciest gossip you’ve ever heard.

If you’re looking for a love like you’ve seen on the silver-screen, that doesn’t exist. The good news is that the real thing is so much better. Amanda would love to help you find it.”

Amanda promises that her book will be a lot more positive than Andi Dorfman’s who was also was engaged to Josh Murray after dating on the show. Hopefully, Amanda won’t talk as bad about Josh as Andi did in her book.

Will you be reading Amanda Stanton’s book this fall?