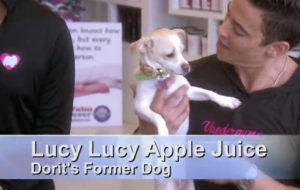 Lucy Lucy Apple juice isn’t just an average dog anymore. I mean, was she ever with that name? She is the royal star at the center of season 9 of RHOBH. She’s stirred up quite the drama between Teddi Mellencamp, Lisa Vanderpump, and Dorit Kemsley.

Due to her rising fame, Lucy’s tagline has unofficially been released by TV Shows Ace, “Throw me into a shelter and I shall return, leading the pack.”

The Truth Shall Set You Free

Well, no one seems to be coming forth about where it all originated. However, Teddi Mellencamp still stands her ground and sheds some light in a recent interview. She is not about to take blame for the “PuppyGate” scandal and says there is more to the story.

In Case You Missed It

During Tuesday night’s show, Mellencamp was accused of orchestrating the events leading up to the PuppyGate scandal. Lisa Vanderpump’s husband, Ken Todd, printed text message chains between Teddi and a man by the name of John Blizzard. Not like any other Mr. Blizzard you’ve heard about, this one is an employee of Vanderpump Dogs. Ken wanted to prove that Teddi and Blizzard allegedly conspired to bring the dog out while the cameras were rolling.

During her recent interview, Teddi called the acts of printing the text messages a desperate act.

“You’re really going all in on clearing your name when you’ve got the dirtiest hands of them all,” she said of Vanderpump’s efforts to expose her. “The moral of the story is, it wasn’t my idea.”

She also hinted that there is more. More texts to be revealed to prove her innocence.

LVP Always Gets the Last Word

You didn’t think Vanderpump would remain silent did you? Especially not after she stormed away from the table in Tuesday nights episode. She took to her blog on Bravo to shed light on her side of the story.

“Lucy was not a traumatized rescue dog who had a history of biting and was unsuitable for children as often stated. She started her life in a loving environment provided by our foundation,” LVP wrote. “We are cognizant of the situation that a dog would be placed in. Young children can terrorize a dog; they have to be taught to be tactile, gentle and patient as the puppy becomes more secure in its new surroundings.”

It could have stayed between Dorit and Lisa as Lisa had in fact spoken to Dorit. Lisa continued, “I said that it was impossible for us to ever give them another dog, to which she agreed. I wasn’t angry with her, but I couldn’t understand why she didn’t return Lucy. I knew at some point a home check was necessary and a transfer of ownership would need to happen. But with Dorit being a close friend, she reassured me that the puppy was going to an excellent home so I didn’t feel it was a matter of urgency. There was no mention of biting.”

The center was alerted that the dog had ended up in a shelter with a euthanasia facility. “The notification came through by email on police headed note paper. All of the employees were aghast at how this had transpired. The note was stating that a reality star didn’t want the dog anymore,” Lisa wrote.

LVP said she tried to keep quiet, but the center was too passionate and upset about the situation.

“The center was heaving with opinions and Puppy Gate was a water cooler situation. John Blizzard has since expressed deep regret that he has perpetuated and engaged in salacious gossip which ignited a maelstrom of negativity. He is twenty-three years old, though. Hopefully one lives and learns,” Lisa Vanderpump wrote. “I sent Dorit a text urging her to get in front this issue. I would have thought that would have included Dorit going down to the center and calming an already emotional young staff, reassuring them that her intentions, albeit careless, had no malintent.”

Who’s Fault Is It?

Lisa continues to say she had no idea that the shelter would contact Teddi. Teddi says Lisa orchestrated the drama. Dorit… well Dorit should’ve told Lisa in the first place that the dog was not a good fit. End of story.

The Real Housewives of Beverly Hills airs Tuesdays, 9 pm on Bravo. How will it all unfold? Keep watching or tune in to TV Shows Ace for the scoop on all the drama.