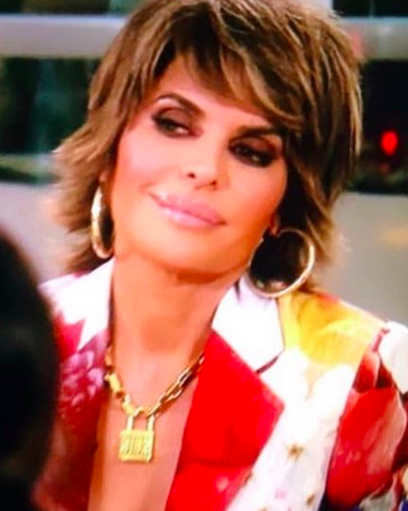 It’s the Lisas’ world; the rest of us are just living in it. For seasons now these women battled for the crown.  Each crafted digs and manipulated the other cast members to get their way.  While the advantage placed with Vanderpump, who Bravo deems an OG Housewife, Rinna may sneak in to take the crown. Vanderpump finds herself distracted and off her typically snarky game while she grieves her brother’s death.  This unfortunate life event is understandably devastating, and most of the women are giving Vanderpump a pass on her behavior, not Rinna. She continues to call it as she sees it.

❗️IMPORTANT❗️We are supporting @RepTedDeutch on his PACT Act and we need two minutes of your time. Supporting our non-profit foundation can also be something as simple as signing petitions. Click the link in our bio to support the PACT Act and have your voice for the voiceless be heard! Some of the key highlights of this Act include: – The PACT Act is a bipartisan solution to something we all care about. It may surprise you, but right now animal cruelty is not a federal crime. We have to fix this gap in the law. – We need to help federal law enforcement crack down on cruelty and exploitation of our animals. – Over 200 law enforcement agencies across the country supported the bill last year. – In one survey, 71% of domestic violence victims reported that their abuser also targeted pets. Thank you for your continued support for The Vanderpump Dog Foundation and our ongoing mission in providing a more humane life for dogs, worldwide. 🐾🐶 #PACTAct #VanderpumpDogs

Did you hear about the dog?

The most significant cause of strife this season?  A little dog with a silly name, Lucy Lucy Apple Juice, has been the chief cause of drama.  Rather impressive for a critter that cannot talk. All parties mishandled poor Lucy’s adoption.  Vanderpump Dogs should never have given a snippy animal to a family with toddlers.  The Kemsley family should have returned the dog when it became clear she wasn’t a good fit for their family. Everyone messed up; morally this should be a wash.  Here viewers are three episodes later still talking about a small breed canine.

Even by Bravo standards, this is a ridiculous tool used to create drama.  It is cheap but yet this little dog is the gift that keeps on giving.  Vanderpump can’t seem to let go of what happened but also cannot bring herself to tell Dorit off–she might have her British passport revoked if she were so direct. This problem causes her to cycle and talk endlessly about the dog or become emotional about her brother.  The women have been very kind to a fragile, grieving Vanderpump but Teddi and Kyle remain perplexed about what to do with the knowledge they have about Lucy.

Come in this Saturday, February 9th to The Vanderpump Dog Rescue Center to “Pamper your Pup” just in time for #ValentinesDay! We’ll have our expert Groomers on site for nail trims, nail painting, bubbles baths and we will showcasing our new #Vanderpuff Grooming line! Hope to see everyone this weekend! 🐾🐶 #VanderpumpDogs

Stir the Pot but Say Nothing

At an event for Vanderpump Dogs, Teddi and Kyle were both pulled aside by associates of Vanderpump, both named John.  The Johns present the women with a small dog and tell their version of Lucy’s story, landing her in a kill-shelter.  Without knowing the background of the story, Teddi and Kyle worry.

Both have come around in their blogs noting that they would also remove an animal from the home that posed a threat to their kiddos.  They don’t know what to do about their knowledge, which Vanderpump uses to her advantage in the Bahamas.  There are many sidebars in dark corners to discuss this and how to address Dorit.  This drama simmers quietly in the background of the episode.  Kyle and Teddi do lots of hand-wringing but take little action.  Silently, Vanderpump goads the women.

Tonight! #RHOBH hits the Bahamas but it’s not all smooth sailing! You know what they say: Life’s a beach and then Housewives have a dinner. Watch the story continue to unfold at 9PM on @bravotv. @bahamarresorts

Private Islands are for Fighting

There is no better locale to have a screaming match than a private island with butler service.  These are just simple facts.  Bravo does a crafty job of burying the lead and leaving a much more insignificant tiff to lunch on the island.  At lunch, the ladies share grievances.  Saintly, Camille forgives Dorit for behaving like a pinot grigio addled psycho last season.

Vanderpump scolds Erika for not offering condolences correctly.  For Vanderpump condolence is not sincere without a dozen white roses.  Grief is strange, and Vanderpump gets a pass from the group but is notably called slimy by Erika in the interviews. Lunch continues, and the ladies exit with limited yelling and crying — what a letdown.

It’s Not Over Until Lisa Rinna Speaks

Rinna stops by Kyle and Teddi’s room and drops some knowledge.  Of course, Lisa wants them to know about the dog and Dorit.  The story engineered so that Lisa could tear down Dorit without dirtying her own hands.  A classic Vanderpump move. Rinna reminds them that they are all part of Vanderpump’s manipulation and to lay low, and not become her puppets.  She goes on to call Vanderpump a puppetmaster in interviews.

At breakfast, the conversation is relatively innocuous. Viewers learn that John Mellencamp considered naming his daughter Babydoll.  It is too bad that this is the moment that the elephant in the room rears its head. Then, Dorit breaks down in tears; Kyle consoles her. It leaves Teddi to the wrath of Vanderpump, who accuses Teddi of spreading lies and being a gossip.

Rinna swoops in and tells it like it is.  It seems the battle lines are drawn, Rinna has the advantage, and she hasn’t backed down.  Rinna has been on the offensive and the record. She states Vanderpump manufactured a good deal of the doggie drama and has been behaving in a way that would get her fired last week on Jenny McCarthy’s XM Radio show.  What more will come out?  Who will win?  Will, a small dog, take down an entire cast of reality stars? Only time will tell.