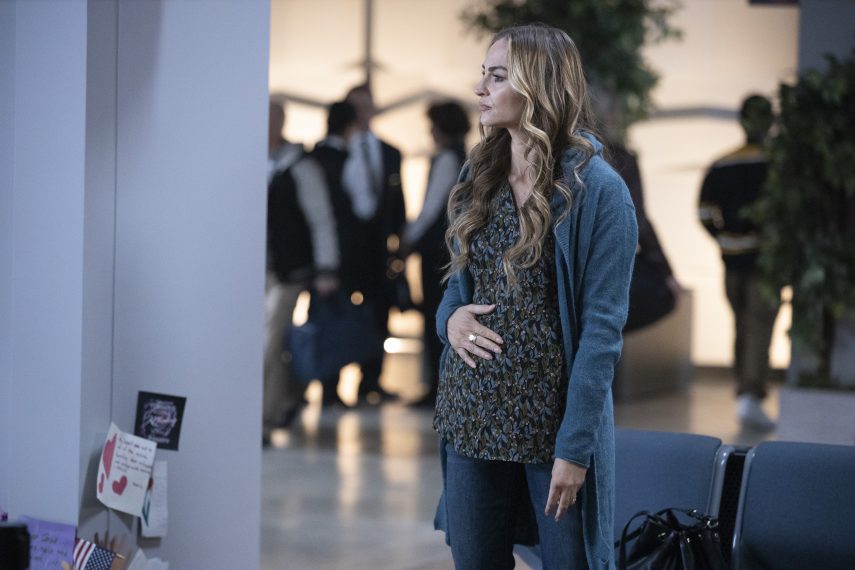 Is everyone ready for the big Season 1 finale of A Million Little Things on Thursday? Will we finally find out who exactly Barbara Morgan is and what was Jon’s tie to her? Season 1 comes to an end tonight.

What can fans expect?

Remember when so many fans were convinced Constance Zimmer was Barbara Morgan? Episode after episode, it looks more and more likely that Drea de Matteo’s character “Mrs. Nelson” could really be the one and only Barbara Morgan we have all been anxious to identify.

In a set of exclusive photos obtained by TV Insider, Drea’s character is pregnant. This may be a reference to her conversation with Sophie that like Delilah, she became a widow while she was pregnant in last week’s “The Rosary.”

We can’t know for sure until Thursday’s “Goodbye” Season 1 finale airs, but the images do offer some clues as the presumed Barbara Morgan has a smile on her face that fans haven’t seen yet.

On most television shows, children rarely play a large weekly role in the series. On AMLT, all the friends still believe that Jon is Delilah’s unborn baby’s father. Theo had nose bleeds and night terrors which are causing much speculation that he may have leukemia and need bone marrow. If Theo is sick, the odds that Delilah and Eddie’s unborn child being a match is a pretty sure bet.

Secrets are coming out

David Giuntoli (Eddie) recently told US Weekly, “Some other people will end up finding out” about Delilah and Eddie and it sounds like that won’t sit well with Gary. “He just thought all the secrets with them were already out there,” James Roday (Gary) notes.

“The album that Sophie is handing to Maggie, in the season finale, is by Colin Hay. He released a song in 2001(dealing with 2001, AGAIN.), called, “Maggie!” That’s not all either….the song is written about a girl he knew as a kid, who later passed from cancer.. ALSO, he released a song called, “A thousand million reasons,” in 2017! It refers to Paris, floating to heaven, and almost all the words Just blew me away. Oh, one more fun fact, Colin Hay has also shared the stage with, guess who?? Kings of Leon, who Eddie always brags about opening up for! This is becoming a huge rabbit hole for me!”

(And don’t forget that Colin is also the name of Gary’s dog.)

Any ideas what next season’s mystery might revolve around on A Million Little Things? Stay tuned for trailers for Season 2 which starts airing in August 2019.