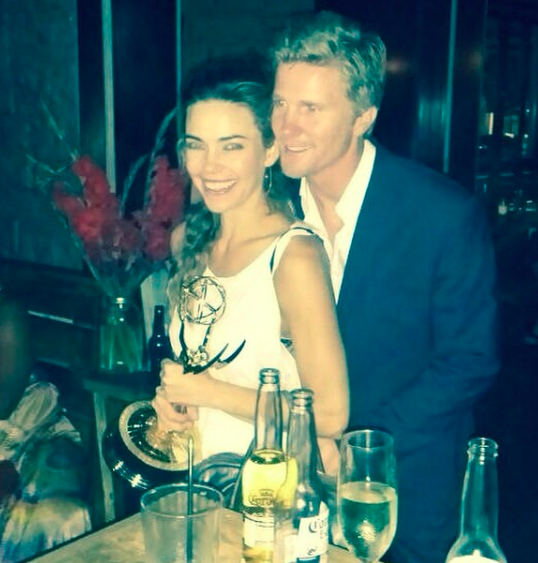 The 1980s are back in a big way in Genoa City.  Dig up the shoulder pads and smear on some blue eyeshadow, this plotline has some very vintage vibes.  JT Hellstrom played by Thad Luckinbill might not be dead after all. Spotted at the Crimson Lights sipping a cup of coffee, it appears as though JT may be back in Genoa City.  It is also possible this sighting might not be JT at all but perhaps a twin.  Or is he an apparition of some sort? Sharon has a storied history of seeing ghosts (or hallucinations). Only time will tell how this story unravels.

On April 24th – We would like to wish this gem of an actor, That Luckinbill, a very happy birthday! 🎁🎉🎂💖 #thadluckinbill #birthday #birthdayboy #celebrate #actor #TheYoungandtheRestless #yr #yr45 #nikita #8simplerules #television #entertainment #take2radio #take2radiosoapsinreview

It cannot go without mentioning that this plot point shares many qualities with a 1986 plotline on Dallas in which it seems as though Bobby  (Patrick Duffy) escaped death. Is JT 2019’s answer to Bobby? Here’s to hoping so! The 1980s were a period of great success in soap operas and some steamy plotlines that are sorely missed. It’s always refreshing to see a throwback to well-executed melodrama, not to mention the return of Thad Luckinbill’s luscious locks.

JT last appeared on viewers screens in July of 2018.  At this point, it looked as though Nikki, Phyllis, Sharon, and Victoria had killed JT or the man terrorizing Victoria, covered up his murder and disposed of the body.  Whoever said women were the weaker sex missed out on what these women are up to while their husbands twist their mustaches and plot “destruction.”  It should go without saying that the women in Genoa City are women of action and will not let one of their own suffer at the hands of an abuser.

Some wild fan theories suggest that JT was not the abuser after all, but Nick disguised in a mask.  Even by soap standards, this plot device seems to be something best left to the cast of Scooby-D00. While in real-life it is highly unlikely that someone might survive what JT went through, here’s to hoping he is back in Genoa City.

Luckinbill’s Instagram reflected that he was back at work on the set of Y&R on February 20.  While he has only appeared on screen briefly so far, it seems like more extensive footage is forthcoming.  Look for a big reveal next week, in early March, as Luckinbill has resigned a contract with Y&R and will be working long term, not just in the capacity of a cameo appearance or a teaser.  Just when viewers thought that the long-winded saga of JT ended, it took a decidedly exciting path.  Long live the 1980s and long live JT.