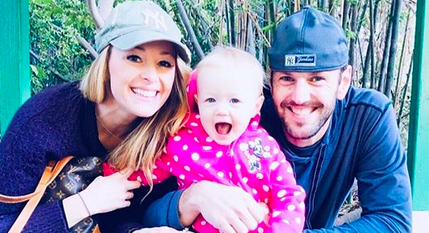 Jamie Otis and Doug Hehner started their relationship on Married at First Sight. You may also recognize Jamie Otis from The Bachelor. The two have been married since 2014 and are the parents of Henley Grace Hehner.

Recently, the couple has been trying to conceive again. Unfortunately, they suffered a miscarriage in January 2019. For now, it seems like they are working on staying positive and enjoying their daughter.

Throughout February, Jamie Otis and Doug Hehner have given fans a glimpse of what they’re doing without any real answers. They have shared cute pictures of themselves on the Santa Monica Pier. Other photos have been taken and posted in California.

Instagram vs Reality✨ • Taking a cute pic at an iconic location while casually licking our ice cream💁🏼‍♀️🌴 VS finding a corner to sit and gobble it 😋🍦 • Gracie’s new fav food is ice cream 🍦 That kid could eat it all day long if I’d let her.🤦🏻‍♀️😂 I actually don’t hate it. It’s way better than icees or snow cones that have zero nutritional value – sooo #mommywin 🙌🏼😜 • I feel like any snack that has milk in it is better than the ones that are just filled with sugar. Milk is a good source of protein and calcium! 💪🏻 And fat-like the fat in whole-milk products is so good for brain development.🧠 Growing kiddos need lots of fat – lucky them! I wish I NEEDED more fat in my diet.😅 • Ok, we’ve been to Santa Monica a zillion times now.☀️ Any Californians out there who can recommend another good spot to visit?🧜🏼‍♀️ • • #milk #milklife #lovewhatsreal #sponsored #icecream #LA #cali #caligirls #family #fambam #california #pier #insta #instagood #picoftheday #babiesofinstagram #instagram #vsreality #marriedlife #MAFS #marriedatfirstsight #rainbowbaby #familytrip #adventures

The couple is currently still in California, which has been provoking some questions. This extended amount of time has gotten fans wondering what’s going on.

Until now, fans haven’t gotten an answer about why the family is visiting the state for so long. Fans have even been asking if they have moved to California.

Finally, they have revealed what they’re doing in California on their podcast.

What did Jamie Otis and Doug Hehner say on the podcast?

On February 27th, a new episode of Hot Marriage, Cool Parents went live. This is the couple’s podcast, which is accessible on all major podcast streaming websites. This particular episode is a Q&A style podcast where fans submitted questions that they wanted Doug Hehner to answer.

The questions covered all kinds of topics about marriage and family, but there is one particular topic that stood out. As mentioned, the couple has been in California for the month of February, some questions have been asked.

Because of all of the speculation about their extended trip to California, one fan asked, “When are you and Jamie going to tell us what you guys are doing in California?”

Another fan asked, “Why did you guys temporarily move to California?” At this point in the podcast, Jamie Otis picks up on the theme of everyone’s questions. She knows everyone wants to know about why they’re in California.

These questions come as no surprise to Jamie Otis and Doug Hehner though. In a tweet, Jamie Otis even addresses that everyone is asking. She says, “We’ve been in LA since Feb 1st and all we’ve heard since then is ‘WHYYYY ARE YOUU IN LOS ANGELES?!?'”

House hunting in a new city isn’t easy but we are doing it!!! 🏡 We’ve been in LA since Feb 1st and all we’ve heard since then is “WHYYYY ARE YOUU IN LOS ANGELES?!?” We share EVERYTHING in our new podcast episode 💗head on over to https://t.co/vsQaktYp2o to hear the episode🥰#la pic.twitter.com/Fc7wIJuHN4

We’re sure lots of fans are happy to finally have an answer about this. Plenty of them were thinking this might be the answer. Of course, this actually confirms their speculations.

What do you think of Jamie Otis and Doug Hehner’s idea to move to California? Were you suspecting that they would be moving there? Share in the comments below.

‘General Hospital’ Recast Leak – Who Is Next In Port Charles?
‘The Grand Tour: Lochland’ Released, Will Covid Derail Next Season?
Jenelle Evans Furious, Mom Barb Goes Behind Her Back, What Did She Do?
Jason Tartick Reveals Embarrassing Fact On TikTok
Here’s Why Jinger Vuolo’s New Profile Picture Has Everyone Freaking Out