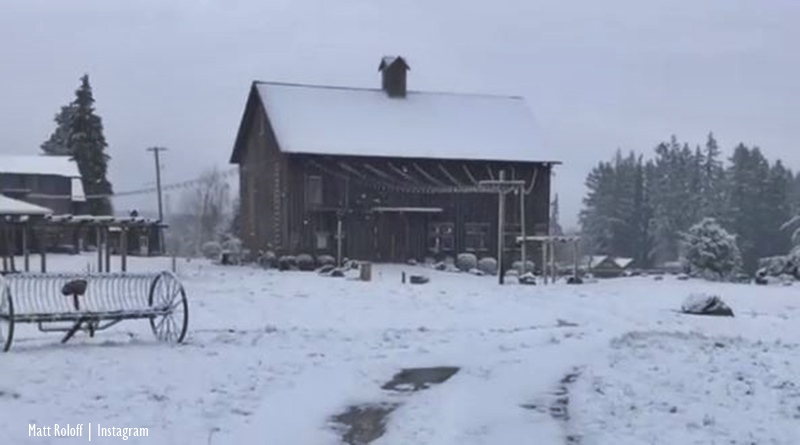 Little People, Big World patriarch, Matt Roloff’s got a few problems down on the farm. He posted a video about hunting down tracks to identify the predator killing his chickens at night. Added to that, while the scenery looks beautiful, the snowy conditions in Oregon make it a bit more difficult to work. Matt explained that he suspected it might be a coyote.

Matt just got back from Arizona about a week ago and he knew the cold weather awaited him. At the time of his departure, he told fans of Little People, Big World that going back home was “bittersweet,” with the bitter part being colder weather. Just in time for the forecast snow, he nevertheless got out and about on the mule to see if they could spot some tracks down the back end of the farm. Matt said in the Instagram video caption that something’s “eating my chickens and keeping Lucy awake at night.”

In the video he shared, Matt explained they were out looking for tracks of what he suspects might be a coyote. He added that they were also trying to keep warm while they did that. Probably with the fresh snowfall, he hoped to pick up the tracks easily. The video showed us some of the back-end of the farm where the trees and fields looked very pretty in the snow.

Somethings been eating my chickens and keeping Lucy awake at night.

While Matt went out to hunt down the predator that’s killing his chickens, his grandchild Ember didn’t like the snow at all. In one of Audrey Roloff’s Instagram stories, she posted up a short video showing Jeremy standing in the snow with their daughter in his arms.

Jeremy tried to get Ember interested in the snow he took from a bush. He touched her face with it but she pulled away. Earlier, Jeremy tried to show her how to make snowballs and throw them, but she didn’t seem to take to the idea.  Like Grandpa Matt, it seems she prefers the warmer weather. Fans of Little People, Big World can see the short clip below.

It often snows in Oregon, but there’s nothing quite like the beauty it brings to Roloff Farms. Amy also took to Instagram to share the pretty snow gracing the fields.

What do you think about Matt Roloff getting out in the cold, on the hunt for a predator that’s after his chickens? Do you think Ember looks unimpressed with the snow?