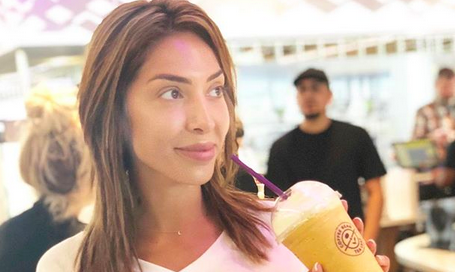 Farrah Abraham from Teen Mom OG is currently dealing with a lawsuit. She was renting two commercial properties for her two stores. These stores are F&S by Farrah and Sophia Laurent Boutique. The properties are located at the Oaks at Lakeway Mall in Travis County.

Check out @sophialaurentchildrensboutique before our doors were first opened! More runway show , ribbon cutting & behind the scenes to come! Thank you for making our celebrity boutique one of the best in the country . #fashion #toys #accessories #sl

According to the company who runs the Oaks, Farrah Abraham signed a five-year lease on each of those two properties. This was back in 2016 so those leases definitely aren’t up yet.

From the looks of it, her businesses weren’t doing so hot. They weren’t bringing in enough money and she felt like she was left with no choice. In September 2018, she closed the stores and she also decided to stop paying rent. Since her leases weren’t up, this got her into some trouble with the Oaks management.

Now, she owes over $100K in rent. Plus, there’s a lawsuit because she skipped out of her leases early. Even though her company’s name is on the lease, she is listed as the guarantor. This means that she is responsible for paying the rent and handling the lawsuit.

Is Farrah Abraham saying anything about the lawsuit?

Farrah Abraham has yet to come out and talk about the lawsuit publicly. It is fairly recent news so she may be waiting or figuring out how to address it. Eventually, she will have to say something about the lawsuit and then come up with a plan going forward.

Apparently, she’s a little bit surprised by this. The Oaks management kept her deposit, which led to her thinking that everything was okay. They are still awaiting her payments.

One of the attorneys from Farrah Abraham’s boutique said that there are “no intentions on making any further payments under the lease agreement.” We’re assuming that Farrah Abraham feels the same way about the situation and will follow what her attorney has said.

Though the lawsuit is important, she is still prioritizing her daughter Sophia’s birthday. Sophia is now 10 years old. In an Instagram post, Farrah Abraham talks about her daughter’s birthday. She says, “HAPPY BIRTHDAY MY TWEEN HAPPY 10Th Birthday! Beautiful, smart, lovable Sophia Laurent Abraham! Love you and so thankful & grateful to have the best Daughter ever!”

HAPPY BIRTHDAY TO YOU @sophialabraham HAPPY BIRTHDAY MY TWEEN HAPPY 10Th Birthday! Beautiful, smart, lovable Sophia Laurent Abraham! Love you and so thankful & grateful to have the best Daughter ever! 🎂🎂🎂🎂🎂🎂🎂🎂🎂🎂

We’re sure that Farrah Abraham will have something to say soon. Until then, she and Sophia are celebrating this big milestone birthday!

What do you think is next for Farrah Abraham? How will she bounce Visit TV Shows Ace for more Teen Mom OG and Teen Mom 2 updates!