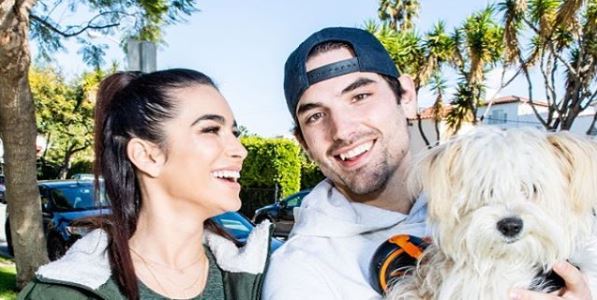 Ashley Iaconetti and Jared Haibon met on Bachelor in Paradise. It may have taken Jared a while to realize she was the one, but now they are living their happily ever after. They are planning their wedding, but that isn’t all they are doing. The couple just wrote their first book together and it happens to be a children’s book. This is all about their love story, but the dogs in their book represent Ashley and Jared.

Ashley and Jared explained that they were asked to write a book about their video The Story of Us. Ashley shared that they felt like the YouTube video they did together pretty much tells the story. It didn’t seem like there was enough information that fans don’t know for an entire book on the subject. You can check it out below.

The couple decided to surprise their fans with their book Lucy & Clark: A Story of Puppy Love. Instead of announcing that it was coming, they just told everyone their book was done and ready to be ordered. You can check it out on their website and order it. They are working hard on adding it to Amazon and bookstores soon. It is only $16.95.

Ashley and Jared started talking about a book, then joked about a children’s book and decided that it was actually a good idea. The book is based on Lucy, who was Ashley’s dog up until 2016 when he passed away and Clark was Jared’s dog who lives with his parents since he moved to LA.

Jared and I wrote a children’s book! 🐶📚 Lucy and Clark: A Story of Puppy Love is loosely based on our love story. It’s a tale of overcoming your fears and discovering the magic that happens when you force yourself out of your comfort zone. Both are lessons Jared and I learned through our love and friendship. There are appearances from some of our closest Bachelor friends in the book. This project is very near our hearts. The story is told through our beloved pets Lucy & Clark. 10% of the net proceeds will go to Sidewalk Angels, a charity that supports no kill animal shelters and helps find homeless animals families. The first 1500 copies sold are signed by us. *Link to buy in bio*

For now, this is the only book Ashley Iaconetti and Jared Haibon have out there. If the right story comes along, they would be interested in writing another one. They are living in LA and between the two of them doing three different podcasts. Ashley does one with Ben Higgins called The Ben and Ashley I Almost Famous Podcast. Jared has the podcast Help! I Suck at Dating with Dean, Vanessa and Jared. Ashley also has the podcast I Don’t Get It with her sister Lauren Iaconetti and reality TV producer Naz Perez. They are also working on a secret project that they will be editing footage from and share details with fans soon.

The couple shares a wedding update

As most fans know, Ashley I and Jared are now planning their wedding. Their big day will be held in August in Rhode Island. This is where Jared’s family is from, so it is the perfect place for their nuptials to take place. Later this month, the couple will be checking caterers to pick out the perfect one.

Their wedding planning hasn’t been stressful. That is because the couple hired Troy  Williams with Simply Troy. He is a great wedding planner that is doing a lot of the work for them.

The couple loves working together. Ashley did tease that the only reason she would ever want him to leave the house is so she could surprise him by cleaning, cooking and looking nice. Jared did admit that there are times he plays a bit too much Fornite with JJ and Tanner, but the couple seems to be doing great. They are even open to the idea of reality television again if they had a bit more control over it and the right opportunity came along.

This couple is not having a television wedding, but Ashley promised that they will have it recorded. They just hired a videographer. Fans will get to see some of it in some way because they plan to put it out there for them.

Everyone watched Ashley I go through being single for a while. She was in love with Jared, but he thought they were better off friends. She was asked her advice to girls who think they won’t ever find their person. Ashley explained that “it just takes one person.” She hated dating and really always hoped she would end up marrying someone that was a friend she had known awhile.

Jared said that you shouldn’t “overthink it” because the person could be “right in front of you.” It did take him a bit to see it, though.

Are you excited to read Lucy & Clarke: A Story of Puppy Love? Share your thoughts in the comments below.