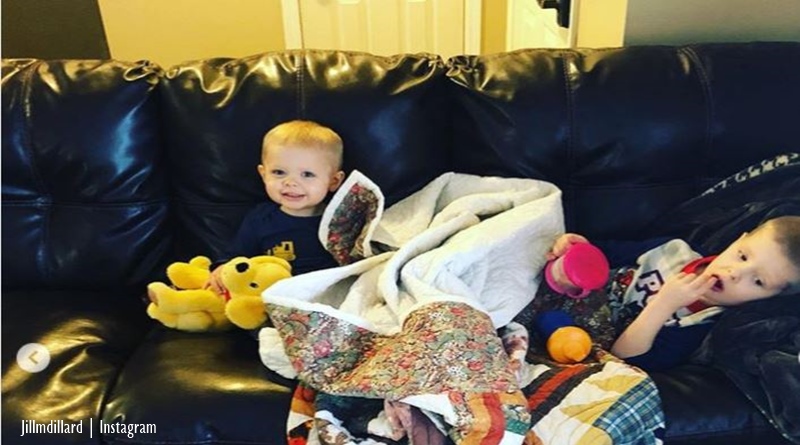 Jill Duggar Dillard woke in the wee hours of the morning to discover her son Israel needed to head for the toilet in a hurry. It seems the poor little tyke’s suffering from a tummy bug that’s doing the rounds. She posted on Instagram about how she and Israel are coping with it, but some fans slammed her for exposing baby Sam to the bug.

Jill Duggar Dillard worries about the rest of the family

In her Instagram post, Jill Duggar Dillard said that she hopes “the rest of us stay well!” Detailing the somewhat yucky experience, she said that luckily Israel told her of his need to be sick so they managed to make it to the toilet, and averted a big cleanup. Next, she bathed him and put him back to bed. Fortunately, he had no further “loss of fluids,” so she let him up and onto the couch to suck on a popsicle and take in some streamed TV time. Actually, the popsicle idea came from her own experience growing up. She noted that “we got popsicles as rewards, or when there was throw-up or blood….we do this in our house now too.”

Of course, fans of Jill Dillard stepped up to say they hoped Israel gets well soon. Other offered their ideas on the best thing to stop tummy bugs. Here’s what some of them had to say:

On the subject of fans commenting about their concerns for Sam getting the tummy bug, Jill replied. She said that “Lysol has been sprayed on everything. ” Plus, she uses her “Thieves essential oil diffusing!” Critics found something to say about her using Lysol in the house. They pointed out that it could be toxic to children. Plus, some said Lysol does not work, only bleach does. Others suggested she watch out for a temperature. Notably, she should take him to a health professional if it goes up.

In the Instagram post, Jill Dillard posted up three pictures. One showed Israel lying on the couch all tucked up while he ate some jello and his popsicle. Certainly, it looks like Jill’s caring for her little boy, and is concerned about his tummy bug. However, one of the photos showed little Sam sitting by his brother Israel. Obviously, followers of the Dillard family grew concerned about that.

Fans of the Duggars and Dillards are never slow to criticize Jill Dillard, and they did just that when they saw Sam sitting next to his sick brother. In fact, Jill made the comment about her concern that the rest of them stay well. Therefore, some people seemed astonished. How come she never kept Sam away from Isreal? A sample of their comments include:

However, in fairness to Jill Dillard, one fan, @cioccaj explained, “if he’s gonna catch it he already did.” That’s because the symptoms show after the contagious stage. They added that being a mom of two, there’s no shot you can keep them separate.” Also, most moms know how it feels dealing with sick children and came across as supportive.

What do you think about Jill trying to use Lysol to stop the tummy bug? Do you think she should keep Sam far away from Israel while he gets over his illness? Actually, is it even feasible to try and keep the two kids separate? Sound off your thoughts in the comments below.

Remember to stay in touch with TV Shows Ace for news about Jill Duggar Dillard and her family.