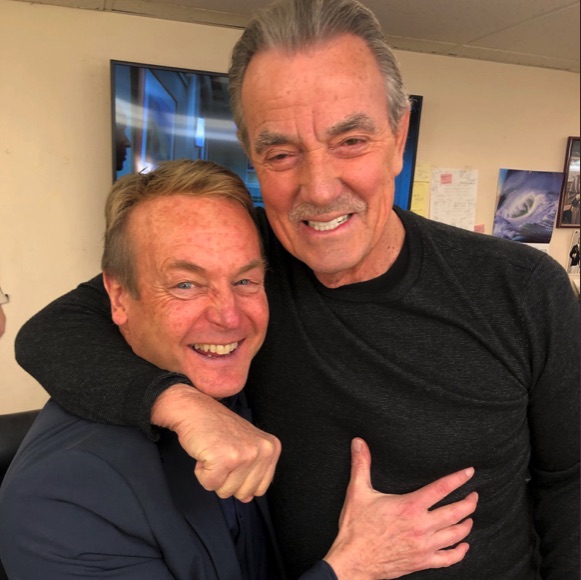 Finally, the biggest Y&R news in months: Doug Davidson is returning to Young and the Restless, after being set free from former head write Mal Young. Now that Young is no longer part of the CBS show, it appears that some of the previous changes are not undone. What do we know now?

Eric Braeden took to social media to announce that Doug Davidson, aka Paul Williams, was returning to Y&R. Braeden posted a welcome back tweet for the former show regular with two simple words, “He’s back!” He accompanied that statement with a smiling photo of he and Paul, smiling and happy.

Eric didn’t explain in what capacity Davidson would be back. Was he guest starring, or is he back as a regular? What we do know is that Paul Williams will be back in Genoa City on March 25. Can we assume he is returning as chief of police? We will have to watch to find out.

Got a new job! Just kidding. Still repairing after the mud flow. 🤡 The guys let me stand in front of their @CaterpillarInc! Fine machines!! They are watching me very closely, I really want to play in the dirt! pic.twitter.com/vhGEYmFMWd

As for Doug Davidson, he was clearly pleased by the love and positive response from Eric Braeden and from the Young and the Restless fans. He joked that he wasn’t expecting a grand announcement from “Newman Enterprises,” and expressed his gratitude towards Y&R fans. Considered a legend in daytime television, fans were shocked when former Y&R head writer Mal Young axed Davidson, and other veterans from the show.

“I will try and answer all of you, but I wasn’t expecting a press release from NEWMAN ENTERPRISES!! I promise I will respond. Again, I am forever grateful to you for all your support. XXOO”

Former Y&R star Greg Rikaart also tweeted to Eric Braeden and Doug Davidson his joy for his former co-star. Rikaart was axed from Y&R back in 2017, and he is now on Days of Our Lives as Leo.

When Mal Young became the main writer, he seemed to want to destroy the legacy of the Newmans and the Abbots. Fans were clearly not happy, and the ratings of the show went down. Braeden now believes that the show is now in great hands. The man that portrays the formidable Victor Newman explained that with executive producer Tony Morina, and new head writer Josh Griffith, the set “vibe” has been transformed.

“I want to thank all of you for being so supportive of our show and DOUGIE DAVIDSON! Ratings have gone up as well! Without you, our friends and fans, none of the above would have happened! We are happy to have Tony Morina as EP & JOSH GRIFFITH AS HW! different vibe on set now.”

Is Adam Newman’s Return Next?

Griffith has brought back Davidson, and the latest rumor is that they are recasting Adam Newman. Despite this recast news, Michael Muhney fans are still holding out hope that he will return to the show and reprise his role as Adam Newman.

Muhney has been absent from social media for nearly three weeks. His last post was from a photo shoot, where he brought his youngest son, Truman. Could Michael Muhney be taking new shots because he is trying out for the role of Adam Newman? Or will his fans see him on another show? Whatever the case, it appears that Griffith is determined to revive the soap and bring back the fans. It should be fun to see what he does next!

Are you excited to see Doug Davidson return as Paul Williams? What other actors would you like to see return to Y&R? As for now, Young and the Restless fans can rejoice over the return of Paul Williams, and very possibly Adam Newman, in the next month or so. Share your Y&R comments below. Make sure you don’t miss new episodes of The Young and the Restless weekdays on CBS.