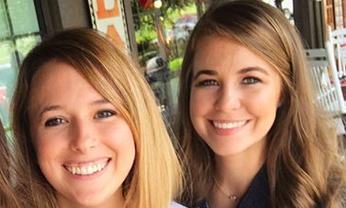 Laura DeMasie is a longtime friend of the Duggars. She has been a part of the family’s wedding and event planning that Jana Duggar helps with. Both girls have decorating and planning skills that are easy to see at Duggar events.

Nothing makes us smile more than good coffee and Felicity. ☕️☺️💕

Laura lived with the Duggars

At one point, Laura DeMasie even moved in with the Duggar family. At the time, she was helping out around the house and assisting with homeschooling. With so many kids at the Duggar home, this is probably a huge help.

Though they appreciate everything Laura DeMasie is doing for their family, she is now moving to Georgia to work at Accent Decor, Inc. She is very into interior design. In a Facebook post, she says, “We were CREATED TO CREATE! Go create something beautiful!”

What might Jim Bob have to do with Jana Duggar and Laura DeMasie?

Well, there has been much speculation about Jana Duggar and Laura DeMasie being a couple. This is possible for a couple of reasons.

First, Jana Duggar hasn’t been in a courtship with anyone. This is rare for a Duggar of her age. Yes, she is only 29-years-old, but most of the Duggars get married in their early twenties. There are rumors that she formerly dated Caleb Williams, but these have not been confirmed. There have been other courtship rumors too.

Next, Jana Duggar and Laura DeMasie are often together. Their Instagram pages include several pictures of the two hanging out. They seem to spend a lot of time together and enjoy each other’s presence.

They could just be friends, but there is always the possibility that they are dating or want to date. If Jana Duggar’s family doesn’t accept this lifestyle, that could explain why she isn’t married yet.

Now that Laura DeMasie is moving away, fans are thinking that Jim Bob, Jana Duggar’s father, has something to do with it. This is partially because he’s a very religious person. In the Duggar family’s religion, same-sex marriage is not acceptable.

Jim Bob is rather authoritative and still has some control over his 29-year-old daughter because she lives at his home. This could mean that he is preventing the two girls from being around each other.

It’s not clear how exactly he could have gotten involved in Laura DeMasie’s job placement. He’s a fairly powerful man though. If he really didn’t want the girls to become a couple, he probably found a way to stop it. Fans are really speculating about what went down, but you know the Duggars will never explain the details.

Do you think that Jim Bob sent Laura DeMasie away somehow, or is it coincidental? Share your thoughts down below! Don’t miss Counting On on TLC on Mondays at 9/8c.

Hannah Ferrier Could Return On ‘Below Deck Australia’ And Here’s Why
John And Abbie Duggar Share Rare Photo For Adorable Reason
‘Welcome To Plathville’ Olivia, Kim And Barry Have A Serious Talk
Clare Crawley & Dale Moss Split?! Here’s Why The Bachelor Nation Rumor Mill Thinks So
‘Bachelor In Paradise’ Cast Evacuated Due To A Tropical Storm