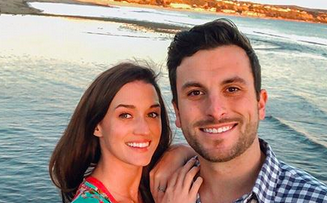 Baby #2 is adding to our crew!! We are overjoyed our bundle of love will be joining us in August! We’ve been dreaming of you for a while now, and you are already loved beyond imaginable, sweet baby. ❤️

Prior to their marriage was their appearance on Marriage Boot Camp: Reality Stars on WEtv. On the show, couples stay in the Marriage Boot Camp mansion. The purpose of the show is to improve relationships. The couples on the show have to do all kinds of drills.

This doesn’t necessarily sound like a bad idea, does it? So, Jade Roper and her now-husband, Tanner Tolbert, became a part of the show. This was back in 2016, which is the same year that they got married.

Not all of the seasons of Marriage Boot Camp have featured celebrity stars. This one did though. It included Jade and Tanner, along with a handful of other celebrity couples.

Unfortunately, her experience on the show did not go as planned. She says that she didn’t have a good time there and that it was not helpful as promised.

According to Jade Roper, this was “actually almost traumatic [instead of] actually helping us.” Remember that this show is meant to improve marriages or relationships. It’s not meant to be traumatic.

She thinks that the producers were far too focused on creating interesting storylines for viewers. This makes sense because they did need to make money off of the show.

Even though she has spent a few years on reality TV and knows how it works, she wasn’t a fan of this show. She said, “I just felt like, obviously they’re making a show, obviously they want storylines. But I felt like nobody was really there to actually give us therapy,”

Sadly, the trauma didn’t go away when Jade Roper got off of the show. She explains her bad dreams, saying, “You wanna know how much it really messed with me? Every night until [the show] aired I would have nightmares about it, for five or six months straight.”

Instead of the show helping her with any issues, she had to deal with this on her own. She talks about how this affected her, saying “Nobody ever really took me aside when I needed some therapy and actually talked to me. It just really messed with my psyche.”

There are a lot of factors that go into a show like this. First, it’s multiple couples living in one house, which could lead to arguments and drama. Second, there are drills, which could be seen as challenges. Third, there is just some stress from being on a TV show anyway.

Did you know about Jade Roper’s experience on Marriage Boot Camp? Leave your thoughts down below in the comments!