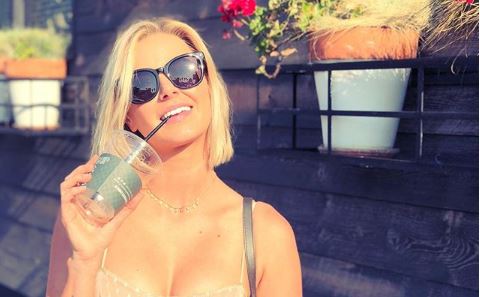 Vanderpump Rules fans were in for a shock on the new episode when Tom Sandoval discussed with his friends whether he and long-time girlfriend Ariana Madix plan to have children and whether not having kids was a deal-breaker for him.

Tom has been vocal on the show about wanting to marry Ariana and have children She has expressed that she has a reluctance to ever getting married at all or having children. Sandoval explained to his friends that Ariana has a “phobia to giving birth.” She might consider adoption, saying he would also be open to adoption.

However, he went on to say that not having children at all was a “deal-breaker.” Sandoval implied he would end the relationship if Ariana weren’t willing to at least adopt a child. After the episode aired, Tom was faced with questions about whether he meant what he said about breaking up with Ariana. He quickly changed his tune, saying he didn’t intend to break-up with her over the issue.

Happy birthday you magical stardust being. The purest soul I’ve ever known. The one who always makes me laugh and makes me feel loved. The one who goes above and beyond to make everyone around you happy. You’re the greatest and don’t you forget it. 😘🚿😘🚿😘🚿😘🚿😘🚿😘🚿😘🚿

Ariana Has Been Open about Her Body Issues

Ariana Madix has been on Vanderpump Rules since 2014. It has only been in the last few seasons that she’s started to open up about her struggles with her body and sexuality. Before that, she was the wise-cracking bartender in the background of the show.

She has discussed such personal topics as her verbally abuse ex-boyfriend and what his words did to her self-esteem. We found out that she doesn’t particularly like having sex because of how her ex used to put her down.

Ariana has expressed several times that she is afraid to have children. The reality star is actually grossed out by the idea of childbirth. She also told producers that if she does decide she wants kids, it won’t be until she’s seen and done everything she wants to do first.

A recent episode had another surprise in store for Ariana when she found out about a story Tom shared. Tom had told everyone a story about the time a drunk Ariana hooked up with Lala. It happened in the backseat of his car while he was driving.

When asked by Jax Taylor about the alleged hook-up, Lala denied it entirely. He didn’t believe her at all. Viewers found out from Ariana’s confessional and subsequent blow-up with Tom and it did, indeed, happen.

Ariana was rightly upset that Tom would openly put her personal business out there with their friends. She said she wasn’t ashamed of the hook-up but felt he had broken her trust.

Tom and Ariana have been dating for five years now and Tom is itching to propose to his lady love. Both stars are in their 30s, so the clock is starting to tick if they plan to have kids. Well, more her clock than his; Richard Gere is 69 and just had another child!

Viewers will have to tune into the Vanderpump Rules reunion later this Spring. You know that Andy Cohen will ask them where they stand on this issue. In the meantime, check out the rest of the drama going down at Sur and TomTom on Vanderpump Rules, airing Tuesdays on Bravo.