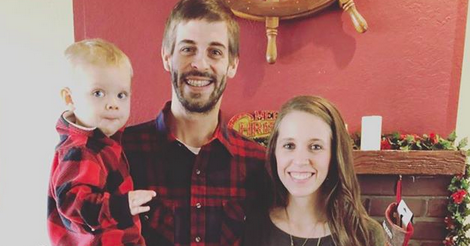 Jessa Duggar Seewald, who is the sister of Jill Duggar Dillard, recently announced her own pregnancy. Now, fans are wondering which Duggar will be the next to get pregnant. It’s been a little while since any of the Duggars have added to their families so we should be getting an announcement from somebody fairly soon.

In a recent post, Jill Duggar Dillard shares photos of herself trying on her new clothes from 3130 Clothing. This is the clothing boutique that her cousin Amy Duggar King owns. Some of the Duggar girls paid a visit to the store a little while ago without Jill Duggar Dillard. It looks like she did some shopping on her own!

Do yourself a favor and check out @3130clothing (My cousin’s new shop!) Got some adorable stuff today and had my little photographer grab some pics for me 😉 Visit www.shop3130.com or swipe up in my story! 👆🏻👆🏻😃💕

In the first photo, she’s holding a bag in front of her stomach. This could be purely coincidental. Still, in the picture from when Jinger Duggar Vuolo, Jessa Duggar Seewald, and Jana Duggar went to 3130 Clothing, their bags were covering their stomachs. Shortly after these photos were posted, Jessa Duggar Seewald announced her pregnancy.

Now, there’s definitely a chance that they have all been holding the bags in front of their stomach as advertising for their cousin’s new store. It does seem slightly suspicious though because Jessa Duggar Seewald did the same thing.

Next are the pictures of Jill Duggar Dillard modeling the clothes. All of the clothes she tries on are very loose or flowy.

The loose-fitting clothing could be part of the Duggars’ attempts to stay modest. They aren’t typically seen wearing anything that is form-fitting.

In the last photo, we can see that her son Israel is the one who was the photographer for this little shoot. He did a great job! He even snapped a selfie when he was finished taking pictures of his mom.

What do the comments say about Jill Duggar Dillard?

As soon as the photos were posted, her fans began commenting and asking if she is pregnant. They seemed to have picked up on the subtle hints as well.

Some of her fans posted very straightforward questions, asking if there is “Another baby on the way?”.

In one of the comments, a fan even called these pictures “a maternity photo shoot”.

Though Jill Duggar Dillard has posted replies to some comments, she seems to be avoiding any of them that have to do with her being pregnant. This could be a sign that she is hiding something. She may just not want to deal with the rumors though.

If Jill Duggar Dillard is expecting again, we’re sure we will find out shortly via her Instagram. The Duggars always try to keep their fans in the loop!

Do you think that Jill Duggar Dillard is expecting again? Don’t miss some of her family members on Counting On when it’s back on TLC on February 11!

Jackson Roloff Bonds With Uncle Jacob: See Adorable Photo
‘Welcome To Plathville’ Season 3 Premiere Date & What To Expect
‘OutDaughtered’ Adam Busby Shares His Secret Ticket To The Gun Show
‘My 600 Lb Life’ Milla Clark: Where Is She Now And How Is She Doing?
‘Extreme Sisters:’ Why Do Patrix & Patrica Want To Move To Orlando?