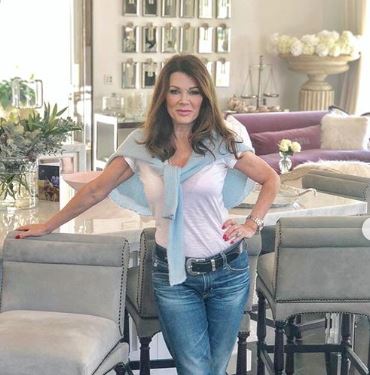 Just recently, Vanderpump Rules queen Lisa Vanderpump fired her 26-year old DJ James Kennedy for fat shaming a co-worker. Viewers saw James Kennedy’s mother Jacqueline come and have a “talk” with Lisa. She then proceeded to tell her how her son looked up to her and how disappointed she was in Lisa. Did anyone know that Lisa knew James’ family? Well, she does, and here is how.

In fact, Lisa was friendly with his parents Jacqueline and Andros Georgiou and that’s how James got his job at SUR. She explained all the details.

“Well, we’re not that close. Or sometimes appears [that way] because of his perception a little bit … but I met James’ parents through Bruno Tonioli a few years ago just before he started work for us, who’s the judge on Dancing with the Stars, who’s an old friend of mine. Prior to that, I had met Andros and Ken knew Andros vaguely. I’d met Andros with George Michael and Andros had been around the scene in London, so we knew him a little bit. But then we had dinner that night and they both said, you know, could you give one of my sons, James, a job, maybe as a busser or a barback? He probably, because we’d started Vanderpump Rules by then, I think maybe we were in the first season, thought, ‘OK, I want to get involved in this,’ and obviously then he started sleeping with Kristen Doute, and he was well in there like a rat up a drain pipe.”

At this point who hasn’t slept with James? Now, it looks like he might have finally settled with just one girl.

Merry Christmas Eve🎄 @mylittlegrahamcracker is getting lots of love his first Christmas and lots of treats! Hope you’re all getting your treats this year too! 🍾

Fans think James has been a nice addition to the cast of Vanderpump Rules, the viewers love juicy drama and he definitely brings it to the show. Fans are also saying that it wasn’t fair for Katie Maloney to give Lisa an ultimatum. If you haven’t heard, Katie told Lisa that she either needed to fire James or she would leave SUR. She said she couldn’t work in a place that allowed that kind of behavior. There are a lot of different opinions on that matter though. Viewers were expecting James to be destroyed and heartbroken about losing his job considering his reaction on the show, but he ended up just blowing up on his co-stars on Twitter. That was after he cried when Lisa Vanderpump fired him of course.

Keep updated on this juicy, drama-filled season of Vanderpump Rules. You will get to see the opening of Tom Tom. You also might see Lisa give James Kennedy another chance, no one expects that but who knows. Watch Vanderpump Rules on Bravo on Monday nights.