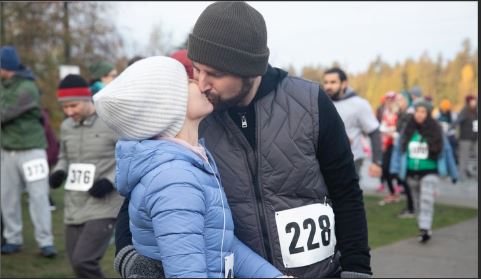 While Maggie is undergoing chemotherapy, she may not have a port, yet she is going to lose her hair. There are some photos floating around the internet with a scarf tied around her head or wearing a hat. Will she get fitted for wigs? If so, what style will she select? Will she only wear one wig or have multiple wigs for various occasions? How long until the character’s hair grows back? Would you like to see her keep her curly hair or is it time for a hair make-over for Maggie? Because of the chemo, something could happen with her hair.

One fan who posted on A Million Little Things Fans Facebook group page:

“But there is one thing that bugs me – Delilah’s hair. It always looks like it needs brushing and dyed. Is this a new ‘messy” style’? And why the long outgrown roots? Personally I think it would look better if they cut the old dyed hair; cut to her natural hair. Cut in a not messy style. Maybe this Sharon Osbourne style? I think Stephanie Szostak is BEAUTIFUL, but I personally think the hairstyle is awful.”

Monday morning made good when @jamesroday gets creative on set with the Dixon family portrait 🤣🤣🤣 The bastard nailed my accent. #amillionlittlethings #bts

Only a few others have agreed with this fan’s negative hairstyle comment. Here is what a couple said:

What an extraordinarily lovely picture of Mrs. O!! And I am afraid I agree, the hair is always distracting to me..silly, but true!! Not judging, just not understanding the rationale!

I agree Her hair always looks greasy and there is no style to it! Love Sharon Osborne!

Are you kidding me? That hairstyle, along with her wardrobe, maybe the biggest reason I like Delilah and root (pun intended) for her. I absolutely love the actress who plays Delilah’s hair as it is. I wish I could achieve that messy, bedhead, sexy ombre hair. Honestly, I don’t care for the suggested Sharon Osbourne’s hairstyle.  She should not touch her hair, because it looks great now. (And I’m not even a bangs person.)

Comments all focused on Delilah’s hair

There are over 40 other comments disagreeing with the original post. Comments include:

I think she is supposed to look so racked with guilt and grief that she just can’t be bothered with her hair. It’s guilt hair.

Well, Delilah does have a lot on her plate right now.

I like D’s hair the way it is. It suits her. I think Sharon’s style is too ‘old’ for her.

Stephanie (and her character Delilah) is French-American. French girls are known to have a certain, sort of.. unkempt hairstyle/look!

Fan Jeanette Heikes sums it up, “I can’t believe it’s gotten to the point where we are criticizing hairstyles ?”

A big round of applause to Jeanette who is probably raising young daughters. But because of this popular fan group thread, discuss the characters’ hairstyles is the focusing of this post.

I truly don’t want to pick apart 16-year-old actress Lizzy Greene, who plays Sophie Dixon, Jon and Delilah’s daughter. Lizzie was only discovered in 2013 at a talent workshop in her hometown of Dallas. I would be remiss if I didn’t mention that Sophie’s long, blah, blonde hair reminds me The Brady Bunch’s “Marcia, Marcia, Marcia.” In a few episodes, chunks of Sophie’s hair has been dyed hot pink in a blatant attempt to make the character appear to be acting out over her dad’s suicide and more importantly, his disappearance in her life.

I can hardly contain my excitement for A Million Little Thing’s return on Thursday, January 17, 2019. Fortunately, there’s no need for me to get my hair blown out as no one will be critiquing my hair. I’ll be sprawled out in bed, in a comfy pair of pajamas, wearing my Warby Parker glasses with my hair in a ponytail or messy bun.