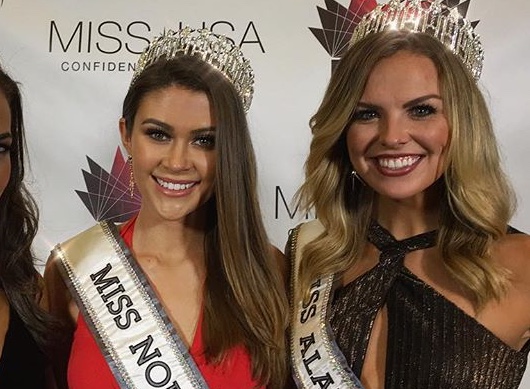 It’s not too often that two Bachelor contestants know each other. This season is a little bit different though. Two contestants, Hannah B. and Caelynn, happen to have a history.

How do Hannah B. and Caelynn know each other?

Hannah B. and Caelynn originally competed in the Miss USA 2018 competition. Hannah B. is from Alabama and Caelynn is from North Carolina. It turns out that these two are pretty close. There were a total of 51 contestants in the Miss USA competition so that gave them plenty of room to become friends. They were roommates as well.

On Caelynn’s Instagram, she shared a picture of herself alongside two fellow Miss USA contestants. One is Hannah B. and the other is Lauren Vizza, who is from Louisiana.

In the post, Caelynn refers to Hannah B., Lauren, and another contestant as her sisters. Caelynn and Hannah B. have each shared a few pictures of each other on their Instagram pages.

They went to Washington D.C. with a couple of other Miss USA contestants. Their Instagram accounts show that they have spent a lot of time together!

It will be interesting to see how this friendship plays out on The Bachelor. Surely it will keep things exciting! If Colton doesn’t know about this friendship yet, he might find out about it soon.

Hannah B. and Caelynn on The Bachelor

To show some individuality, the girls each met Colton in their own unique ways. Caelynn followed the Miss USA lead and wore a sash that said “Miss Underwood”, borrowing Colton’s last name.

On the other hand, Hannah B. arrived with a pill bottle, with a “gas” label on it. It’s unclear what this meant exactly, but at least it was different from Caelynn’s idea. The two former contestants definitely could have ended up using the same idea with the sash! Luckily, they decided to distinguish themselves from one another.

Also, we recently found out that a different 2019 contestant knows a contestant from a previous season too. There could be lots of other connections that we have yet to learn about!

Do you think that this past situation will have an influence on the show? Maybe there will be some competitiveness between these two girls. Don’t miss The Bachelor on Monday nights on ABC to see what’s next!

‘Temptation Island’ Evan Smith’s Unexpected Job
How Far Along Is Scheana Shay And What Is Her Due Date?
Kody Brown Of ‘Sister Wives’ Goes Off At Fan On Twitter
‘Below Deck’ Season 8 Reunion Focuses On James Hough’s Eyebrows
‘Days of Our Lives’ Spoilers: Charlie Dale Murdered, John Black Tops Suspects’ List