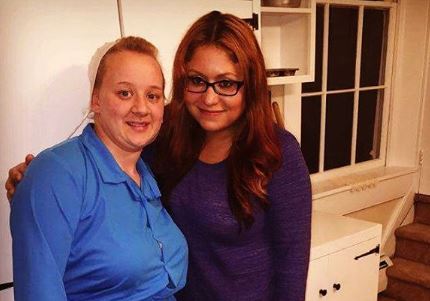 Tonight on a new episode of Breaking Amish on TLC Sabrina Burkholder revealed the fact that she hadn’t been feeling well. Sabrina had everyone worried about her. She has been through struggles with addiction in the past. It turns out that wasn’t what was wrong with her this time.

Sabrina Burkholder hadn’t felt well at all. The viewers, of course, thought she might be using again or actually detoxing. Others wondered if she was pregnant again. It turns out that Sabrina was pregnant, but she had a miscarriage. That was the issue with her.

It was really sad that Sabrina Burkholder had to deal with this issue. She has already lost her children due to things that she did in the past. Sabrina didn’t share all of the details about who the father is or if she was hoping to have a baby with this person. Jeremiah Raber and the rest of the cast were supportive of her during her rough time. It was great to see them being so good to her.

How is Sabrina now?

Sabrina hasn’t been posting on her Instagram. The last post she made was clear back in 2016. The fans are really curious to see how she is seeing that this episode was filmed months ago. She should be feeling better by now.

There have been new posts put up on her Facebook though. They make it look like things are going pretty well for her. It is great that Sabrina is posting because this proves little things like the fact that she isn’t in jail or rehab. Hopefully, this means that she is on the right track and things are looking up for her.

Right now, there has not been a confirmation that Breaking Amish is coming back for another season. That being said, you never know if Sabrina will be back again or not either. Hopefully, she is doing well and will give fans some updates about her health and children very soon.

Are you surprised to hear that Sabrina Burkholder had a miscarriage? Let us know your thoughts in the comments section below. Don’t miss new episodes of Breaking Amish when they air on Sunday nights on TLC.