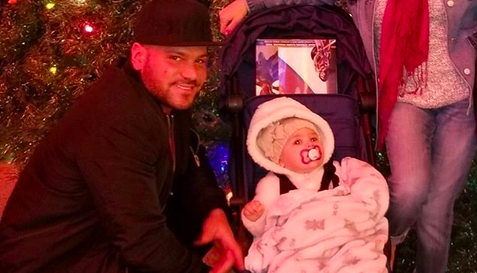 On December 25th, Ronnie Magro, from MTV’s Jersey Shore, shared a picture featuring himself, his mom, and his daughter. This sweet Christmas photo showed fans how he spent the holidays with his new daughter, Ariana Sky.

A baby’s first Christmas is a pretty big deal! It’s an exciting milestone for the parents and the child alike. And there are so many firsts that go along with the holidays, such as visiting Santa and taking family photos. Ronnie Magro made sure to capture all of the highlights and shared them on Instagram!

From the looks of it, she had a great holiday with her grandma and her dad. Jen Harley, her mom, also shared a photo. The family didn’t go into detail about what they did to celebrate Ariana Sky’s first Christmas.

Jen Harley did mention that Ariana Sky was very busy moving around and that it was hard to get a good picture of her. Her dad posted a picture of her on Christmas, calling her his Elf on a Shelf.

Ronnie Magro became a father to Ariana Sky in May of 2018.  Ronnie’s always sharing sweet posts of his daughter. His fans seem to love the cute baby and she even has her own Instagram account!

Though mom and dad have had a rocky relationship, they seemed to pull it together for the holidays. Their relationship has been very turbulent, which has led to some doubts that they will make it last much longer. They have a violent history and it’s been filled with rumors too.

In addition to all of this, little Ariana Sky will become a big sister in a few months too. Ronnie Magro recently shared a picture of Jen Harley’s baby bump on his Instagram.

Ronnie Magro seems to be a very involved and happy dad! His little daughter seems like a huge light in his life, even when things are rough. Hopefully, things will improve soon for these parents!

You can see Ronnie Magro and the rest of the Jersey Shore gang when the show returns to MTV for Season 3 in 2019!