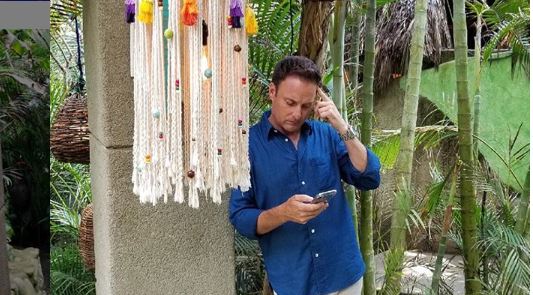 When The Bachelor first started, Chris Harrison was a married man. That isn’t the case now. Instead, he is a man making great money who has to pay spousal and child support. Chris was married to Gwen for 18 years before they decided to split. It turns out that because he is making more money now than he used to Chris now has to pay more to his ex-wife.

Radar Online was able to get the details on how much Chris pays his ex-wife Gwen. It turns out that he is now paying a total of $32,000 a month to her. Most people don’t even make that much in a month and Chris has to give that much to his ex.

I said it was ok for @ashley_iaconetti to give everyone the finger. Well done @jaredhaibon I wish these two love, happiness and instagram

Back in 2012, he had a lower amount due to her. It was only $28,000 total then, but it has increased. Chris Harrison is making more money, which means she gets more of it. The original agreement is the reason he has to pay more. It was reported it says, “if either Party’s financial situation substantially improves or declines, child support will be adjusted to statewide uniform child support guidelines.” Chris also has to pay for the boys to go to college, but that is obviously something he can afford.

Future of The Bachelor

Since his divorce, there has been talk about Chris dating now and then. He is still not remarried though and some fans have begged for him to be cast as The Bachelor in the future. The show doesn’t look like it is going anywhere regardless.

Are you shocked to see how much Chris Harrison’s spousal and child support went up? Share your thoughts in the comments below. Also, make sure you don’t miss Colton Underwood as The Bachelor starting on January 7, 2019, on ABC. Spoilers are starting to come out and it looks like a wild season. You know Chris will say it is the most “dramatic” ever.

‘Below Deck Med’: Was Captain Sandy Too Soft On Lexi Wilson?
Huge ‘Survivor’ Twist Could Mean Winner Leaked Early
‘When Calls The Heart’s’ Chris McNally Strikes A Pose With Erin Krakow
Did Erika Jayne Stage Her T.J. Maxx Shopping Trip? Some Fans Think So
Why Wasn’t Michael Allio Chosen As ‘The Bachelor’ 2022?