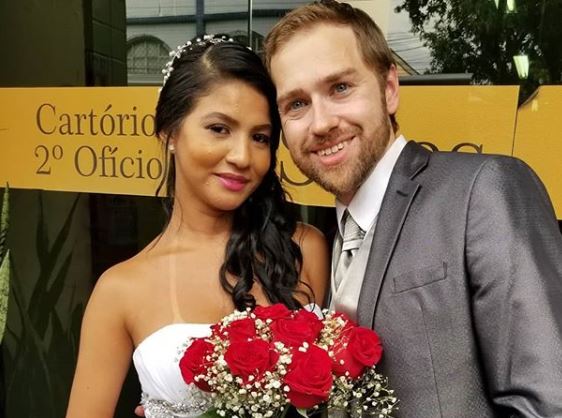 A huge 90 Day Fiance spoiler is out and it looks like Paul Staehle and his wife Karine are off filming. It is obvious that a new season of 90 Day Fiance: Happily Ever After is filming. There has been a lot of talk lately in Facebook groups about if Paul and Karine are on this show.

A few fans have mentioned seeing Paul with a camera crew. That would explain a few things. The big clue now is the post that Paul Staehle made on his Facebook page. Check it out below. Update: The post was originally there and then later Paul took it down. He must have realized people were catching on.

So according to Paul Staehle, they can’t do any interviews or posting. Well, that is easily explained if the couple is filming again. It would be the perfect explanation. Paul hasn’t shared since then and it looks like he won’t be giving any updates for a bit. TLC doesn’t want anyone to accidentally post a location or a spoiler while they are filming.

Right now, Karine and Paul are staying pretty busy with her pregnancy. This will be their first child together. The couple has had a few ups and downs, but it looks like they could be working it all out. One big thing is if they are filming now the fans will get to see her pregnancy and hopefully even how they are as parents.

It has also been revealed that Chantel and Pedro are filming again as well. You can assume that it is for the same season of the show. These are both couples that fans have wondered how they are doing and want to see updates from.

Do you think that Paul and Karine Staehle are off filming now? Let us know in the comments section below and don’t miss new episodes of 90 Day Fiance on Sunday nights on TLC. A new season of 90 Day Fiance: Happily Ever After should be coming soon.