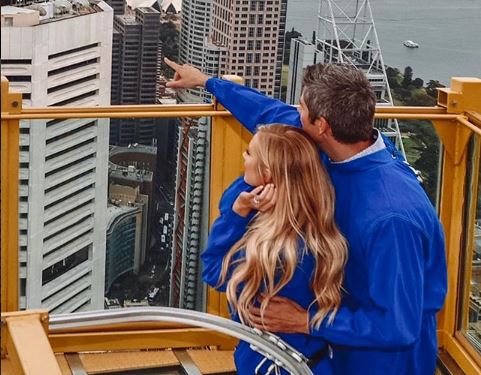 .It hasn’t been long since Arie Luyendyk Jr. and Lauren Burnham left The Bachelor making themselves one of the most controversial couples to leave the show. After Arie broke his original fiancé, Becca Kufrin’s heart he decided to go for runner-up Lauren. Fans weren’t happy, but now the couple is doing well and even expecting a baby. He told Today how he found out about her pregnancy.

Arie told Today that he could kind of sense a changed in Lauren before she even knew she was pregnant. She also experienced weird cravings that clued Arie in. This included meatballs in the morning, not a normal meal for someone who isn’t pregnant.

A friend of the couple had been trying to get pregnant so she gave Lauren one of her extra pregnancy tests, which ended up reading positive. Arie told Today that he was the first one to see the plus sign and started crying right away. Lauren was in disbelief so the couple went to the store to get ice cream and five more tests, further proving Lauren really was pregnant.

1 month from today I get to call you my wife ❤️

The couple appears to be really excited for their new baby and aren’t letting it change their plans for their January wedding, Lauren is just going to make sure that she gets a fitting close to the time of the wedding so the dress fits.

Arie reflects on his time as ‘The Bachelor’

On the show, Arie didn’t only talk about Lauren’s pregnancy during his time with Today. Arie Luyendyk also talked about his time as The Bachelor. He claimed with all of the production and “moving parts” of the show it made it really hard to be himself. This ultimately led to him making the wrong decision when it came time to propose. Now, he’s grateful Lauren has given him the chance that she has.

One of the most disappointing processes for Arie Luyendyk Jr. was how much was actually left out of the show. When he got to watch it after living through it, things were missing. Of course, they have to edit it down.

“I always describe the experience as reading the best book you’ve ever read with all the beautiful details and moments you paint in your mind, then watching the movie version and leaving disappointed because so much was left out,” Arie told Today.

Matty is buying Outback tonight.. roommates on the podium today. Good job to “the hoff” @jeffhoffman_47 on the win. Another one tomorrow 🏁

Are you excited for Arie and Lauren’s new baby due next summer? Leave your thoughts in the comments.