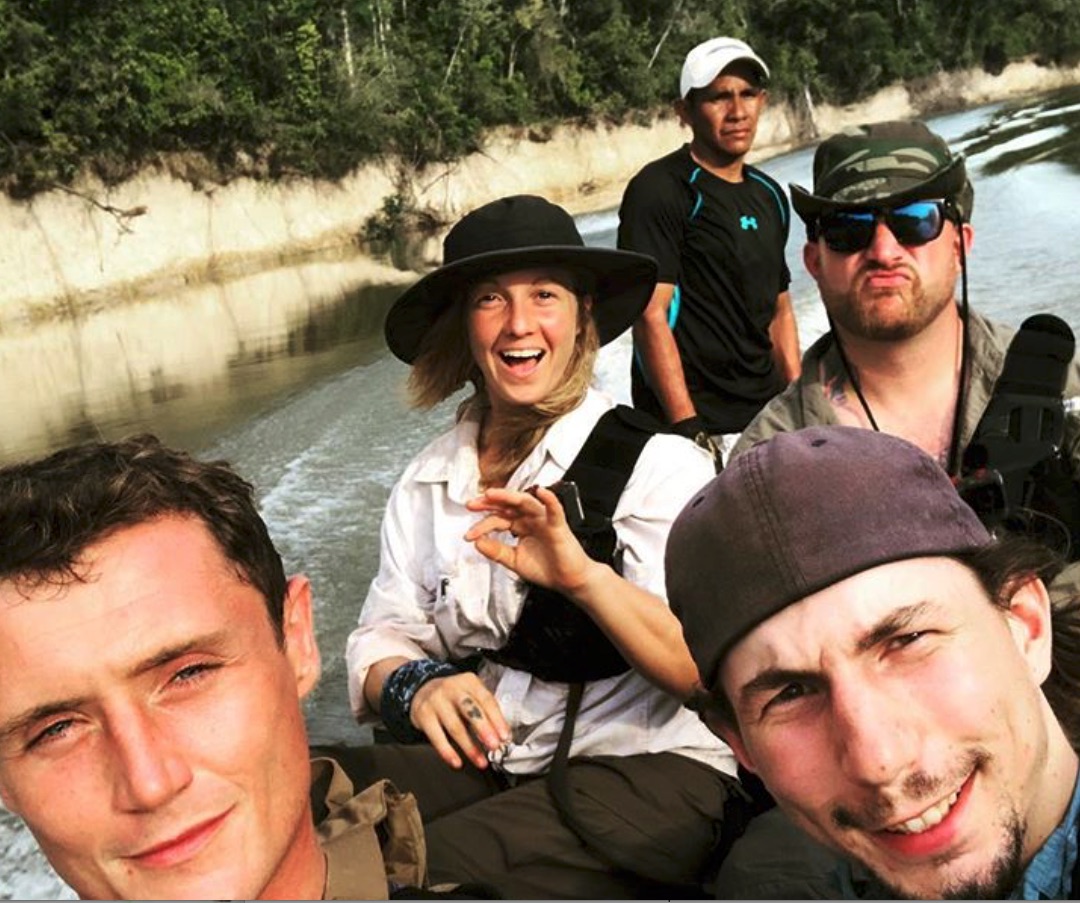 Parker Schnabel has been posting photos on social media from his latest gold mining adventure. This time, he appears to be seeking gold in Papua New Guinea. His energetic team includes some familiar Gold Rush: Parker’s Trail faces including wilderness expert pal Karla Ann, who was in the first two episodes, and cameraman Sam Brown, who joined the team in Guyana, replacing James Levelle, who Parker stopped speaking to when they returned from their old style Alaskan adventure.

Yet, there is no Rick Ness to freak out over spiders and creepy crawlies. Does this mean that the longtime Gold Rush bromance between Parker and Rick is over?

Before becoming a gold miner, Rick Ness grew up working at his dad’s construction company using big trucks and machinery. The 6’5 Ness played college football, but his potential pro career ended with an injury. A Renaissance man, Rick began playing stand up bass and toured with the 5-piece 357 Stringband. That led him to Eastern Alaska, where he met up with young gold miner Parker Schnabel.

Rick impressed Parker so much that a few months later, he asked Rick to join his team. Rick joined Gold Rush in season 3. After a few seasons learning the ropes, Rick was the obvious choice for foreman. Although friends, over the years, the two have butted heads on many occasions. For example, in season 8, Rick had gone home to spend time with his mother who was battling cancer, Parker changed things around on Rick’s claim. The usually affable foreman was frustrated and felt micromanaged when he returned. He clearly wanted to make his own rules.

When The Bromance Ended

Before Rick went to Guyana with Parker to film Season 2 of Gold Rush: Parker’s Trail, Rick was offered his own gold claim. Rick was given the chance to move on and make his own rules. Parker knew that Rick was a hard worker and although he was sad to let him go, Parker realized that his foreman was ambitious and capable of becoming successful in this new challenge.

Parker also indicated that although the two of them would always see each other, their relationship was not going to be the same again. Gold mining is an all-consuming business. They may get together for beers or Rick may pick Parker’s brain for advice. It is not the same as working towards the same ambitious goal. Now the two best pals are competitors and the bromance fading.

Gold Rush fans have witnessed how Rick’s personal life had become complicated as his mother fought brain cancer. Rick was with his mom as her brain cancer worsened and shared the tragic news that the doctors told her that they were out of treatment options. Their relationship was beautiful and loving. His youthful mom was always eager to show off her son, and devoted son Rick was always there to care for her. After she tragically passed away in the early spring, Rick was barely able to take time to mourn her loss as he had to frantically prepare for his first season as mine boss. Rick had less than three weeks to accomplish what normally takes several months.

Although the season started with Parker warning him that “no one makes money their first year,” it is obvious that making money is Rick’s only option. He brought a team of friends to join him on this gold mining adventure, and he had their friendship and his house on the line. Meanwhile, Parker has had plenty of issues with inept crew members and natural disasters. Unlike before, he is not taking it out on anyone as he did with Rick Ness.

Although Discovery has not officially announced anything, Parker Schnabel’s Instagram posts have made it clear that the next season of Gold Rush: Parker’s Trail will be from Papua New Guinea. Where is Rick Ness? His social media indicates that he spent Thanksgiving with family and hanging with his mom’s dog Ruby. We don’t know if he was invited to go to Papua New Guinea. Odds are, he may have decided that resting up and preparing for next season was a better use of his time.

Then again, these sorts of adventure treks never really been Rick’s thing. When Parker was promoting the first season of Parker’s Trail, he did say that having Rick there was a “bit of an experiment.” Parker indicated that Ness was not “built for this.” Perhaps now that Rick Ness is a mining boss, he is more confident leading. Maybe this confidence allows him to say no to Parker. We can only guess that Rick’s real reason for not venturing to Papua New Guinea will be revealed in future Gold Rush episodes.

What is interesting is that Karla Ann Charlton is back again on Parker’s team and quest to pilgrimage to gold mine in new places every year. Last year, during mining season, she worked for Parker Schnabel, but she is now part of Rick Ness and his misfit team of adventurer friends. Does Karla Ann’s friendship with both miners indicate anything? Possibly. Most likely the two men are still good friends and share similar gold mining friends. Now, they are now on very different and busy paths. The bromance may appear to be over, but the friendship does appear to remain.