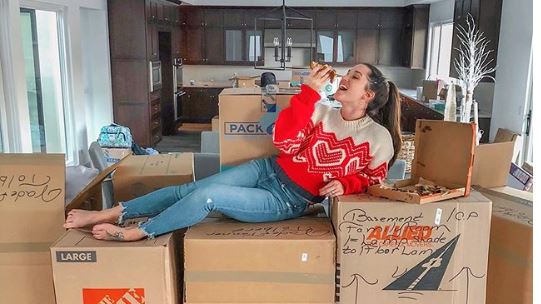 Jade Roper Tolbert and her husband Tanner have been on a road trip moving across the country. They didn’t share where they were moving. Today, the couple finally arrived at their destination and shared the news with the fans. Jade shared the information on her Instagram page because fans have been stalking it to see where they ended up.

Where did Jade and Tanner end up?

Jade shared that they were at their final destination. They showed the beach all around them. It was an amazing view for Jade and Tanner’s new home. Emey even got to play in the sand a little bit. It turns out that they are now in San Juan Capistrano which is six miles from where they got married. This is in California. There was a lot of speculation that they would be in LA, but that isn’t where they ended up.

Tanner Tolbert shared that he had been in Kansas City for so long it was time for a change. This was a big move for the couple considering that they recently built a home. Jade showed that the hard work starts now as she would be unpacking. This will be a big change from dealing with snow in Kansas City because now they are in an area with no snow at all.

Jade Roper Tolbert met her husband Tanner while on Bachelor in Paradise. These two fell in love right away and have been together ever since. They have one daughter Emey. They built a house together and now made a huge move across the country.  It looks like they will have a lot of friends in the area. A large portion of Bachelor Nation lives out in California. This is going to make things easier on the couple by having friends to help.

Are you surprised that Jade and Tanner Tolbert live in California? Let us know in the comments below, and don’t miss watching Colton Underwood as The Bachelor starting in January on ABC.

Kim Kardashian Receives Backlash For Hosting SNL
Jana Duggar Finally In Love? Fans Discover New Hint
Scott Disick Is No Longer Keeping Up With Any Of The Kardashians
‘Bachelor In Paradise’ Cast Evacuated Due To A Tropical Storm
‘BIP’ Spoilers: How Did Ivan Hall Break The Rules?