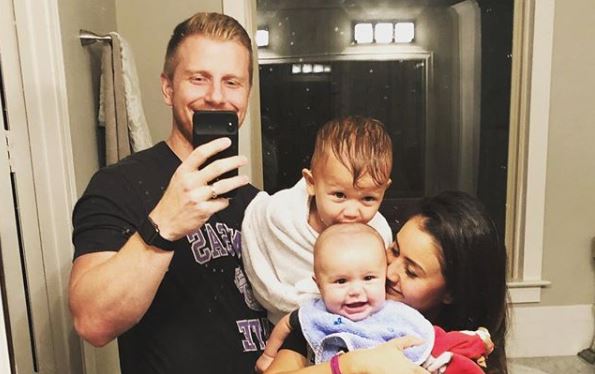 If you don’t know already, Colton Underwood isn’t the first virgin Bachelor. Former Bachelor Sean Lowe was also on the virginity boat but in a different way. Why is Colton’s virginity causing such an uproar when no one ever talked about Sean’s? It’s kind of getting out of hand if you ask Catherine Lowe, Sean’s wife. The happily married wife explains how Sean really just wanted to wait until marriage. Now they’re happily married with two adorable kids.

Sean was actually a born-again virgin. He had sex back in college but then decided not to do it again until he got married. Sean even said he talked to God about his decision and felt like it was the right one.

Sean Lowe’s wife states “I mean, I knew that his values were really important to him the whole season. It just didn’t come up because it wasn’t important to me.” Wow, she really is the one for him. Catherine explains a whole point of view about how they need to focus more on Colton’s other qualities, not just his virginity. She said, “So I’m surprised as to why it’s such a huge point for Colton, and I really hope they start to focus on his other good qualities.” Even though all the fans want to know more about Colton Underwood’s virginity, they also want to know more about Colton as a person.

The dude and I are sitting here talking about Halloween and how only terrible people give out candy corn. I believe in speaking truth to my children. And if you like the shades, @diffeyewear has their new fall collection out for both men and women. And as always, they donate a pair of eye glasses to a person in need for every pair sold- awesome company! Use code “SEANLOWE” for $25 off at diffeyewear.com. #diffpartner

Colton’s fans wonder if he stays a virgin

When Colton knows what he wants, he goes for it without waiting. Fans found this out when they heard about Colton ending his season early, but who does he pick? Fans are also dying to know if Colton is still a virgin. Colton is an athlete who is a good guy, and fans want to see that side of him. They are hoping the show makers don’t focus everything towards him being a virgin. VIewers also found out that Colton is getting tired of this virginity obsession. Seeing that he isn’t the first Bachelor to be a virgin, it is a bit surprising. Sean Lowe’s virginity wasn’t’ a focus at all.

Fans want all of their questions to be answered, and you’ll just have to wait and see all the drama unfold on television. Everyone is waiting for this drama-filled season to take place, and they’re also super excited to see who Colton Underwood picks and why he ends the season earlier than planned. Stay tuned and watch this juicy season play out in January of 2019 on ABC.