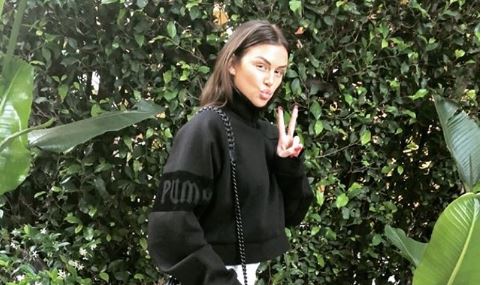 Vanderpump Rules fans know that Lala Kent kept the name of her now fiance a secret for the longest time. The couple is now engaged and Lala was very excited to reveal his name when the show came back to Bravo, which was December 3. She revealed that his name is Randall Emmett who is 47-years-old, and yes Lala is only 28. All of Lala’s co-stars gave her so such a hard time last season about her older boyfriend, but she very obviously doesn’t care. Everyone already knew who she was dating, but it probably feels good for her to be able to say it.

Even though the couple is engaged, they are in absolutely no hurry to say their I do’s. They haven’t even started planning and they announced their engagement on September 2. The reality show star even states that they’re probably not even going to start planning until 2020. She said, “I have not even started. I’m just enjoying being a fiancée. I have no plans to start I think for a while. We’re thinking about 2020 for the time we’ll get it moving.” Well, that’s no hurry. Fans are wanting to know what is taking them so long. One question everyone has for them is, will they film their wedding? Hopefully, so, everyone loves seeing a good celebrity wedding.

Have I told you today how in love with you I am?

Lala Kent doesn’t like to involve Emmett in her reality show world,  “My relationship is usually in the background when it comes to the show,” she then went on saying, “You don’t see much of it. We talk about it a little bit, but I keep him out of that world.” I think we can all respect that, not a lot of people do that. Fans are saying that you can tell they are head over heels for each other and keeping their relationship off television is probably for the best. Viewers know how much drama happens on Vanderpump Rules and how it ruins a lot of relationships so Lala Kent is trying to steer clear of that.

Are Vanderpump Rules star James Kennedy and Lala Kent still friends? Especially after the rumors of James cheating on his girlfriend with both males and females? Will James be invited to the wedding? Will their friendship be good by then? Find out and keep watching this season of Vanderpump Rules on Bravo on Monday nights.