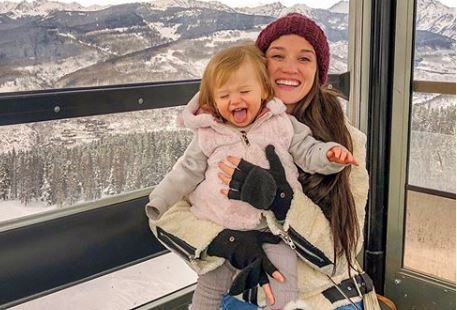 Jade Roper Tolbert’s daughter Emmy is almost 16-months-old and she happens to not be walking yet. Jade and Tanner Tolbert met and fell in love on Bachelor in Paradise. After getting married, the couple welcomed their daughter. Jade does a great job of sharing updates of their daughter on her social networks.

Jade shamed for her daughter not walking

Right now, Jade and Tanner are on a road trip moving to a new location. They have been posting a lot about their daughter. They took her to a very hands-on museum and she also got to ride the gondola. The family went up and down but didn’t actually ski. In all of the pictures, Jade Roper Tolbert or someone else is holding Emmy. It turns out that she hasn’t started walking yet. All children do things at their own pace.

One post of Jade holding her daughter on the gondola has got a lot of people talking about the fact that Emmy doesn’t walk yet. Some people have been blaming Jade for the fact that her daughter doesn’t walk. Others are defending her and explaining that because her daughter isn’t walking yet there is nothing to worry about. A lot of parents have stories to share about their children walking at the same age as Emmy or older. She seems to be getting a lot of differing opinions.

Jade shuts down the haters

Jade Roper Tolbert actually went to her Instagram story to talk about what was going on. She shared several replies to her posts about Emmy not walking. Jade was even told by one person to put her daughter down and let her walk. Another one blamed Jade being on Instagram all the time for Emmy not walking on her own yet. Jade didn’t reply but did shame one follower for their comment. She isn’t going to let people continue to give her a hard time without calling them out.

Do you feel like there is an issue that Emmy isn’t walking yet or should people just mind their own business? Let us know your thoughts in the comments. Also, don’t miss watching Colton Underwood as The Bachelor starting in January on ABC.