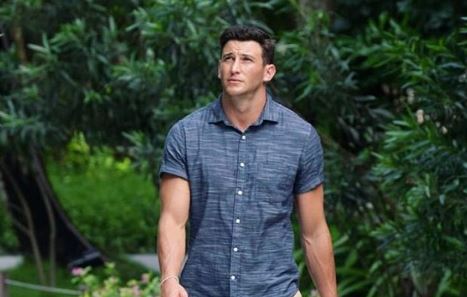 Colton Underwood is a virgin and he will be the Bachelor this upcoming season. There has been a lot of talk about the upcoming season and his virginity, but how does Colton feel about the blowup about this news? Truth is, he’s getting tired of it, he feels like that’s all people talk about anymore. He doesn’t want people thinking that’s all he is, a virgin.

Fans are shocked to hear that Colton cut his season early, he just knew which girl he wanted to be with and didn’t see any reason to keep the others there any longer. Blake Horstmann hung out with Colton at a Denver Nuggets basketball game recently. Blake shared that he didn’t try to get anything out of Colton about how the Bachelor stars season turned out, and he still has no clue if Colton is still a virgin. He does know that he is “happy”. However, he really just wanted to enjoy the night with his friend.

On this night, Colton even sent out a funny picture on Instagram that got everyone talking. He teased being out with the girl he picks already, but it was really just Blake.

Blake did share about how Colton feels about all of the virgin talk this season. Here is what he had to say.

“I don’t know if insensitive is the word, because he’s very open about it. He has no problem talking about it, which I respect a lot. But I mean, even he’s getting sick of it… It’s all it is, it seems like.”

Did they make the right choice for The Bachelor?

Fans know that Blake was a choice for being the Bachelor along with Jason Tartick, both from Becca Kufrin’s season of the Bachelorette. Blake stated, “Absolutely. I do [think Underwood was the right choice]. I don’t think there was really a wrong choice, between me, Jason and Colton, so we’re all very supportive of him.” He added that he wasn’t shutting down the idea of being the bachelor in the future. “Honestly, if I’m single and everything, I would [do it]. I really believe in that process, I’ll defend it to the day I die, so yeah, I think I would, if the opportunity arises.” Are you happy that they chose Underwood to be the Bachelor, or who would’ve been your choice? Some fans say they wanted Ben Higgins to reappear and be the Bachelor again.

Bachelor viewers are so excited to see this season of The Bachelor unfold. One big question that everyone is wondering is, is Colton still a virgin? Who does he choose? Are any girls on this season a virgin? You’ll have to watch to find out. Tune into the upcoming season in January on ABC. Colton Underwood is on a mission to find love.