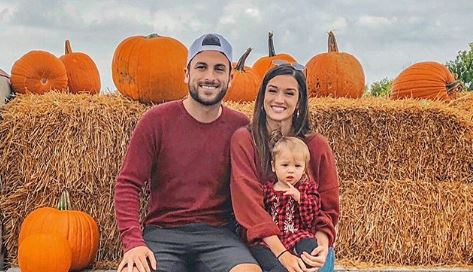 Jade Roper Tolbert and her husband Tanner Tolbert of Bachelor in Paradise have been teasing fans about a big move. They built a home recently, but are already moving just a year and a half later. Now, Jade is going to her social networks to share a cross-country road trip. This has everyone really trying to decide where they are moving. For some reason, Jade and Tanner want to keep the mystery going a bit longer.

Jade and Tanner revealed the move

Not long ago Jade and Tanner Tolbert revealed that they are moving. They didn’t say where they are going, though. All that they said so far is that they are moving even though they just built their home. Fans are speculating where the Bachelor in Paradise couple could be going. It sounds like most people think Nashville, so they are closer to Carly and Evan Bass. It will be interesting to see where they end up.

Beeeee… goooooood. We left a trail of Reeses Pieces down the street to our house for the trick-or-treaters! ? #ETphonehome #HAPPYHALLOWEEN

Where does it seem they are moving?

Today Jade Roper Tolbert was all over her social networks sharing that they were on a road trip. They were living in Kansas City before the move. On Instagram Stories, she showed them in Colby, Kansas. Next, they were in Denver at a children’s museum. Tanner shared as well, but only the same places that Jade did. It is hard to tell where they are going to end up.

It sounds like Jade and Tanner Tolbert are taking a long road trip to get to where they are going. The fans can’t wait to hear where they are moving. This news should end up coming out in the next few days. Hopefully, they won’t keep teasing everyone and this Bachelor in Paradise couple will reveal where they have moved.

Where do you think that Jade and Tanner Tolbert are moving? Let us know in the comments below. Also, don’t miss Colton Underwood as The Bachelor when it starts airing in January on ABC.