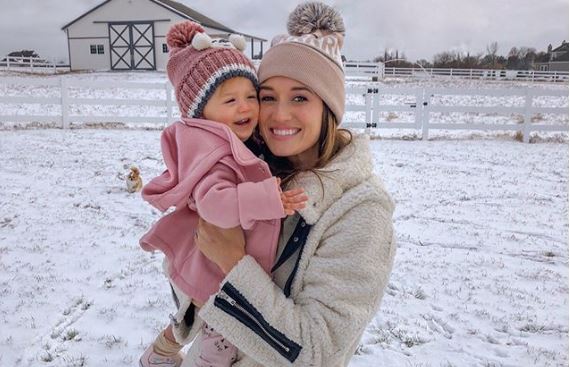 Jade Roper and Tanner Tolbert fell in love on Bachelor in Paradise. They are doing great, but the couple just confused fans when talking about a new move. Just a year and a half ago Jade and Tanner built their own house to share with their first child. Jade went to her Instagram and shared a post that revealed they are moving.

In this post, Jade Roper Tolbert talks about how they just built a house, but have decided they are moving. She is asking the fans where they think she is moving to, but not giving them the details. So far, Jade hasn’t posted a new post sharing where they are moving either. Everyone is stalking her page hoping to hear where they plan to go. Tanner Tolbert hasn’t shared a word yet either.

We are going to miss our home, but we are on to new adventures! I’m so excited for a new chapter in our life together as a family; although, it makes me a little sad to know Emmy won’t remember her first home, but someday we will get to bring her back and show her. Any guesses on where we are moving!?

The fans are going crazy asking a ton of questions about where they are moving. Most of them seem to think that they are going to move to be closer to Carly Waddell and Evan Bass. They live in Nashville. Jade Roper and Carly Waddell are really close to each other. They spend a lot of time together. It wouldn’t surprise anyone if this was where they decide to move.

Jade and Tanner Tolbert are still staying quiet about the big move. Fans are just going to have to wait and see when they reveal the news. One big question on Jade Roper’s feed is if they are going to build their house again when they move, but so far Jade hasn’t answered that question.

Don’t miss watching The Bachelor 2019 with Colton Underwood when the new season starts airing in January on ABC. Hopefully, he is able to find love and get his happy ending.