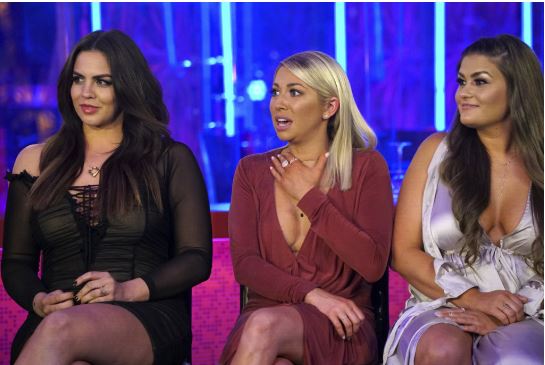 Vanderpump Rules star Brittany Cartwright is working hard on planning her wedding to Jax Taylor. The viewers have seen this couple go through a lot over the years. Things are looking up for them now. Us Weekly shared the details about who Brittany will have standing by her on her big day. Of course, you are going to see some Vanderpump Rules stars.

Kristen Doute and Scheana Marie Shay shared that they will both be bridesmaids at her wedding! These girls have gotten really close since Brittany moved to LA to be with Jax. She is actually really liked by all of the girls including Jax Taylor’s ex-girlfriend Stassi Schroeder. Brittany is such a sweet person that it would be hard to have an issue with her.

While at the 2018 People’s Choice Awards at Santa Monica’s Barker Hangar, Kristen Doute shared saying, “Duh! Brittany’s wedding, are you kidding me? I would create myself as the only bridesmaid if I could. Of course.” Scheana just simply told them that she is actually the maid of honor. When asked for the wedding date, she didn’t want to be the one to reveal that news. It sounds like they are all excited about it.

Details of Jax and Brittany’s wedding

You know that the Bravo cameras will be rolling when Brittany Cartwright and Jax Taylor get married on Vanderpump Rules. These two seem ready to tie the knot and Jax has even talked about wanting the couple to have babies sooner rather than later.

The wedding won’t be until the summer of 2019. It has already been decided that it will be in Kentucky. This is where Brittany of Vanderpump Rules is from and where her family is at as well. Brittany and Jax have both been working on being healthier. You can really tell that she has lost some weight. She is going to look perfect on her wedding day.

Don’t miss watching Vanderpump Rules when it returns with new episodes on Bravo. It will return on December 3, 2018.