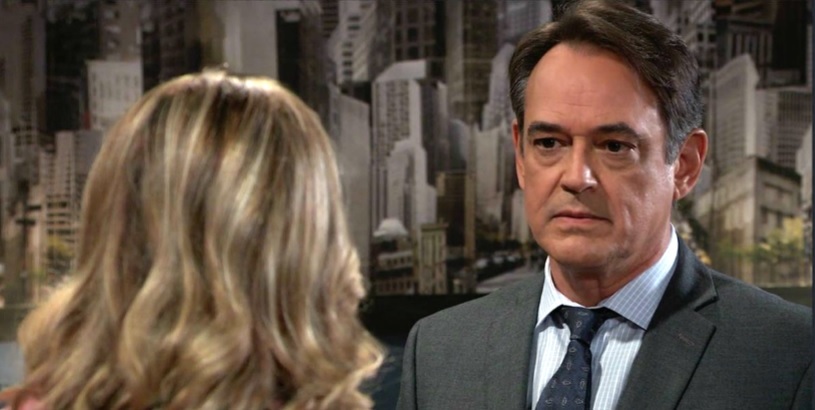 General Hospital spoilers have learned that murder is about to visit Port Charles once again.  Since switching places with his brother Kevin Collins, Ryan Chamberlain (Jon Lindstrom) has been able to ignore his murderous instincts. That will all change this week as Ryan claims his first victim in years.

Ryan Has a Score To Settle With Nasty Nurse Mary Pat

So far Carly Corinthos (Laura Wright) has had two run-ins with her former Ferncliff bully Nurse Mary Pat (Patricia Bethune). It’s a safe bet that Ryan isn’t a fan of hers either. Except for his revenge on the nasty nurse will have more of a…..shall we say….personal touch. General Hospital spoilers indicate that Mary Pat could likely be the first to die at Ryan’s hands.

Kiki Jerome (Hayley Erin) who is likely living on borrowed time with Ryan seems to have “bonded” with Ava Jerome (Maura West), GH spoilers hint that the killer could seek revenge on her daughter for her. Ava has talked to Ryan thinking he’s “Kevin” on more than one occasion about her anger towards her daughter Kiki (Haley Erin) even going so far as to get Ava to admit that she’s thought about killing her firstborn. This would likely be a murder that would shock General Hospital to its core.

Stella Henry Gets in Ryan’s Way

Stella Henry (Vernee Watson) embodies everything Ryan hates about women. Not only is she controlling and domineering with everyone except maybe for Mike Corbin (Max Gail)……but she talked to Ryan as though he was insignificant. That’s a big no-no. Ryan could very well decide that it’s time that Stella permanently loses her groove.

Recently Alexis Davis (Nancy Lee Grahan) has resumed therapy with “Kevin”.  In her latest session, she talked about how she tries to control the lives of her children.  Alexis could very well have talked herself onto Ryan’s new hit list.  It is possible that the next time Alexis goes to see Ryan at General Hospital, she could find herself as his next victim.

During her session with “Kevin,” Alexis talked about her latest client, a young man who was being forced into treatment against his will by his mother.  It won’t take Ryan long to figure out that Kim Nero (Tamara Braun) is the person Alexis was talking about.  Ryan might decide to help Oscar (Garren Stitt) divorce his mother outside of the courts.  With both Kim and Ryan spending so much time at GH, this easily puts the good doctor in Ryan’s sites.

How many victims will Ryan claim before the switch is discovered?  Come back to TV Shows Ace for more on GH.

Everything You Ever Wanted To Know About ‘Temptation Island’ Star Erin Smith
‘Married at First Sight’ Jamie Otis Talked With The Dead
Is Michaela Bates Sharing Anything About Her Struggle With Infertility?
‘The Young And The Restless’ Spoilers: Rey Confronts Chelsea
Candace Cameron Bure Gets A ‘Fresh’ Look For The Spring — See Photos